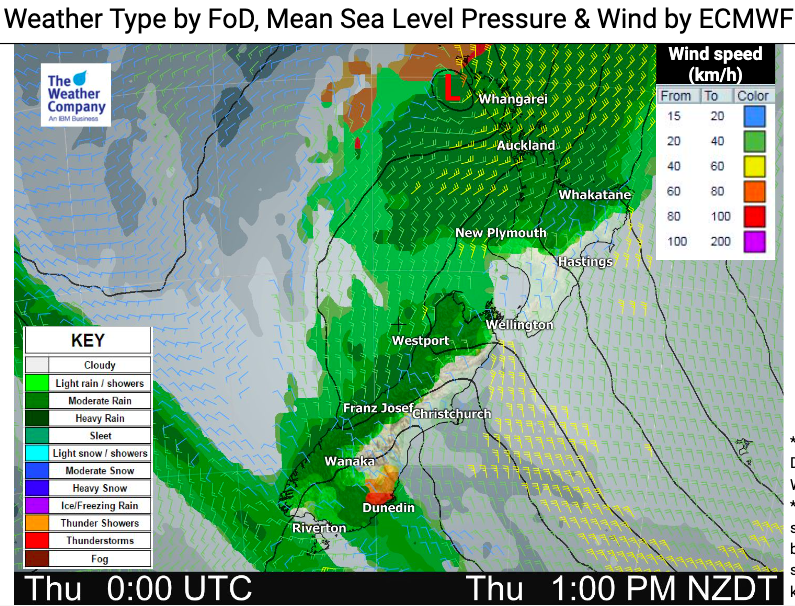 Slow moving rain with heavy falls is finally in the forecast for northern NZ later today as La Nina’s sub-tropical rains finally start to move in. It’s a big break to the weather pattern the North Island in particular has been affected by in recent months. Another low may also be coming in early next week.

For now, Aucklanders still must be conserving water – because there is no guarantee this will hit the Hunua Ranges (but latest rainfall estimates look even more positive with RuralWeather.co.nz estimating as much as 30 to 60mm may be coming for the storage lakes over the coming days. August was the last month to see healthy rainfall in the region – and even then it was a one off.

Around NZ today humid northerly quarter winds will keep temperatures above average, except for around Bay of Plenty and Waikato where the thick cloud cover will make for a fairly average day temperaturewise – after a warmer than normal start to the day.

Rain spreads down the North Island later in the day and at night.

Some rain on the West Coast also while a weak cold front brushes Southland and Otago later bringing some rain and/or showers/drizzle.

The low moving into northern NZ will also bring a burst of strong winds and gales into the Auckland region this afternoon, along with eastern Waikato and exposed coastal areas. Winds ease again tonight.

THE REGIONALS – For Thursday

Eastern North Island
Quite cloudy and humid with north to north east winds. A few drizzle patches and the odd shower, long dry spells too. Rain develops at night in the north.
Highs: 20-22

Canterbury
A mix of sun and cloud, with clouds thickening at times. Sunnier spells near the coast. Warm to hot North to north west winds.
Highs: 21 – 28

For where in particular Earl? Perhaps we’ve made a mistake.
Cheers
WW