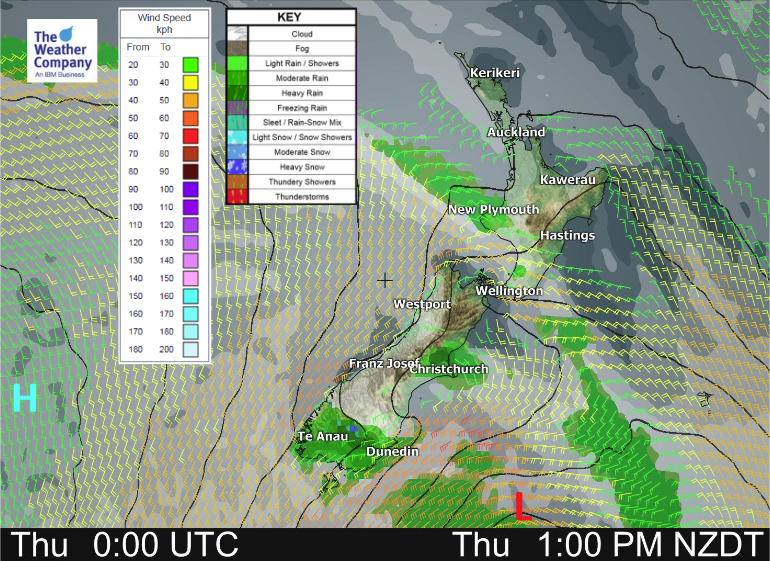 A cold front moves off the upper South Island today then pushes over the North Island this afternoon and evening bringing in a cool southwest change.

Most regions around the South Island see some rain or showers for a time today, Nelson and Marlborough are fairly dry though till overnight when a few showers move into Marlborough. A few showers affect the North Islands southwest this afternoon then in the east this evening.

The South Island has a much needed cool change today but it will be warm this morning North Canterbury northwards before cooler winds move in. Nelson has a nice day. The North Island still has quite warm temperatures, especially in the east.

As southwesterlies move through winds may become strong about eastern coastal South Island areas this afternoon / evening for a time before easing overnight.

Northland, Auckland, Waikato & Bay Of Plenty
Mostly sunny, some cloud at times. Southwesterlies freshen in the evening with increasing cloudy spells for a time, there may be a shower mainly about Waikato.
Highs: 24-29

Western North Island (including Central North Island)
Northwesterlies with increasing cloud in the morning, a shower or two moves through around midday then clearing away in the afternoon with sun breaking back through.
Highs: 21-24

Eastern North Island
Mostly sunny and warm, winds from the northwest for most however about coastal Hawkes Bay and Gisborne expect afternoon easterlies. Southerlies develop for Wairarapa in the afternoon spreading further north in the evening with some cloud and a risk of a shower.
Highs: 25-33

Canterbury
Sunny areas and increasing cloud, southwesterlies strengthen in the afternoon especially about the coast. The odd shower, mainly coastal then in the evening showers becoming a bit more widespread.
Highs: 17-26