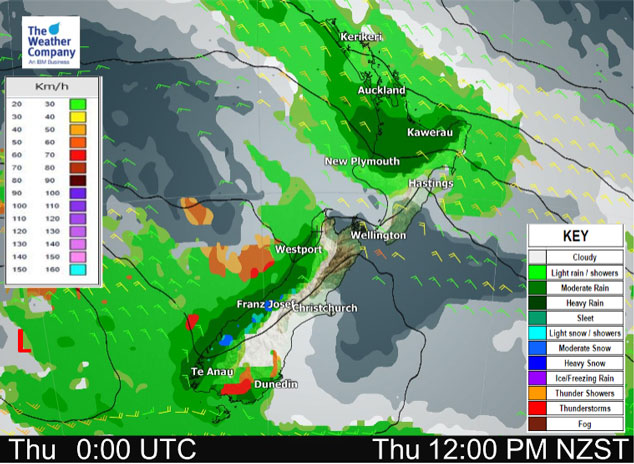 A northwest airflow continues over New Zealand today, wet weather in the west and mainly dry in the east for the most part. Scattered rain may spread into Hawkes Bay for a time this afternoon however and Southland / Otago sees showers this afternoon possibly heavy.

Northland, Auckland, Waikato & Bay Of Plenty
Patchy rain, clearing later in the evening. Rain may become heavy for a time about western East Cape in the afternoon. Northwesterly winds.
Highs: 15-18

Western North Island (including Central North Island)
Rain, heavy at times then easing during the afternoon as breezy northwesterlies tend a little more to the west. South of about Palmerston North conditions are mainly dry in the morning then expect a shower or two from afternoon. There may be some sun late in the day before dusk about coastal areas.
Highs: 14-18

Eastern North Island
Sunny areas and high cloud, some scattered rain may spread from the west in the afternoon about Hawkes Bay for a time. Northwesterly winds.
Highs: 20-23

Marlborough & Nelson
Sunny and warm. Northwesterlies, breezy in the afternoon for Marlborough.
Highs: 18-21

West Coast
Showers, may be the odd isolated heavy fall with thunder (mainly south of about Greymouth). Northwesterly winds.
Highs: 13-16

Southland & Otago
Morning sunny areas. Cloud thickens in the afternoon with showers developing, easing later in the evening. Showers may be heavy with isolated thunder in some spots. Light northwesterly winds change southeast around midday.
Highs: 13-17