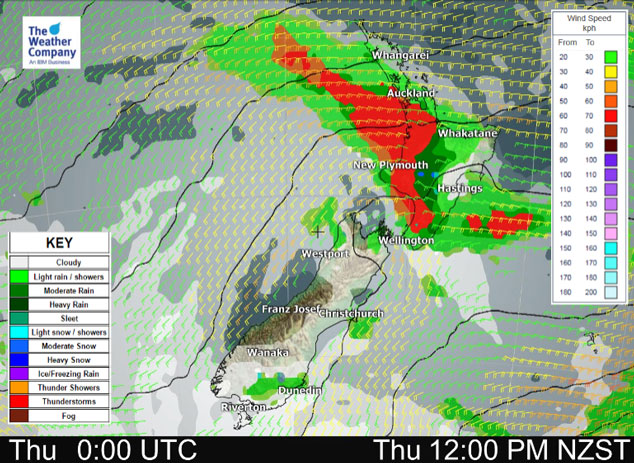 A cold front pushes off the upper South Island this morning then onto the North Island this afternoon. Westerlies ahead of the front, changing cooler southwest in behind.

Northland, Auckland, Waikato & Bay Of Plenty
Some cloud, risk of a shower mainly out west. Showers becoming heavy during the afternoon for all pushing in from the west, showers may contain hail and thunder then easing / clearing away this evening as fresh westerlies change southwest.
Highs: 14-16

Western North Island (including Central North Island)
Showers, becoming heavy in the morning with possible thunderstorms and hail. Easing from mid afternoon then clearing evening as southwesterlies push through. Some snow to 700m about the Central Plateau.
Highs: 10-14

Eastern North Island
Showers push through Wairarapa in the morning then Hawkes Bay / Gisborne during the afternoon, showers may be heavy with a risk of hail / thunder then clearing away during the evening. Some sun before showers move through.
Highs: 13-16

Wellington
A few showers develop in the morning with a southerly change, clearing afternoon and sunny spells increase.
High: 12

Marlborough & Nelson
Showers, perhaps an isolated heavy fall with some hail about the ranges during the afternoon then clearing evening. Southwesterlies die out then winds tend onshore in the afternoon for a time.
Highs: 12-15

Canterbury
Cloudy areas and the odd shower, especially afternoon then clearing away this evening. Southwesterlies freshen in the morning then dying out by evening.
Highs: 9-12

West Coast
Mostly sunny about South Westland, showers further north mostly clearing in the morning and some sun breaking through but the odd shower may linger at times for the rest of the day. West to southwesterly winds.
Highs: 10-13

Southland & Otago
Showers and a risk of small hail eases clearing early afternoon then sunny areas increase. Some snow in the morning to 500m. Southwesterly winds ease dying out in the evening.
Highs: 9-11