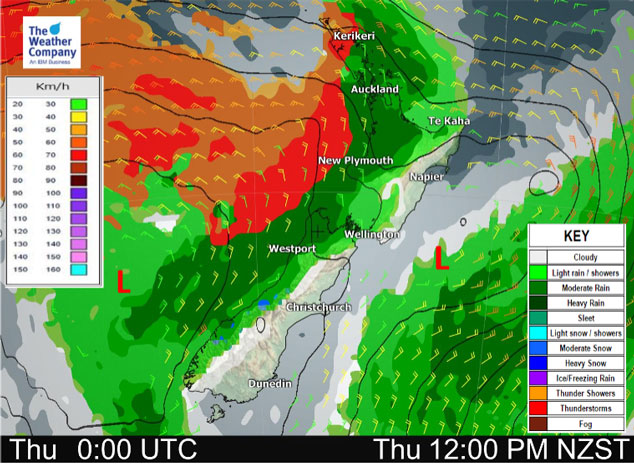 A front pushes in from the west over New Zealand today, potentially unstable conditions may result for western regions.

Northland, Auckland, Waikato & Bay Of Plenty
Showers push into Northland in the morning then elsewhere during the afternoon from the west, possibly heavy with thunder. Conditions ease about Northland from afternoon then elsewhere in the evening. North to northwesterly winds.
Highs: 16-19

Western North Island (including Central North Island)
Dry to start, some sun possible then showers move into Taranaki late morning then elsewhere during the afternoon. Showers may be heavy with thunderstorms (especially about Taranaki) then easing in the evening for areas away from the coast (i.e. further inland). North to northwesterly winds freshen.
Highs: 14-17

Eastern North Island
Mostly sunny, there may be some high cloud. A few showers spread from the west late afternoon / evening, mainly about Wairarapa. North to northwesterly winds.
Highs: 16-20

Wellington
A dry morning, may be some sun then showers push in during the afternoon from the west. May be the odd isolated heavy fall. North to northwesterly winds freshen as showers arrive.
Highs: 14-15

Canterbury
Mostly sunny then cloud thickens from afternoon, rain moves into the high country from afternoon also and a few spots of evening rain may reach the coast. Light winds tend easterly.
Highs: 13-15