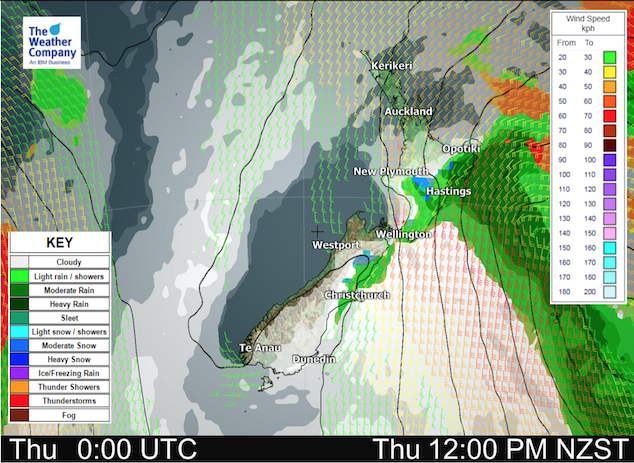 A cold southwesterly airflow (strong about the lower / eastern North Island) eases away later today and a ridge of high pressure moves in overnight.

Western North Island (including Central North Island)
Showers, heavy at times from Kapiti up through to the Central North Island, easing from afternoon and clearing by evening. Snow to 500m. A mix of sun and cloud about Taranaki. Fresh south to southwesterly winds ease in the evening.
Highs: 4-12

Eastern North Island
Showers, may be the odd heavy fall then easing from afternoon although not easing about Gisborne till evening. Snow to 500m. Fresh gusty southwesterly winds.
Highs: 9-11

Marlborough & Nelson
Mostly sunny after any morning cloud clears, showers about southern Marlborough (south of the Wairau Valley) with snow flurries to 500m clear away in the afternoon. Cold southwesterlies. Light afternoon northerlies for Nelson.
Highs: 8-12

Southland & Otago
Morning cloud about Southland and Central Otago breaks then mostly sunny, light winds. Coastal Otago sees morning showers clear although there is the chance one or two may linger through till evening, light southwesterlies.
Highs: 6-9