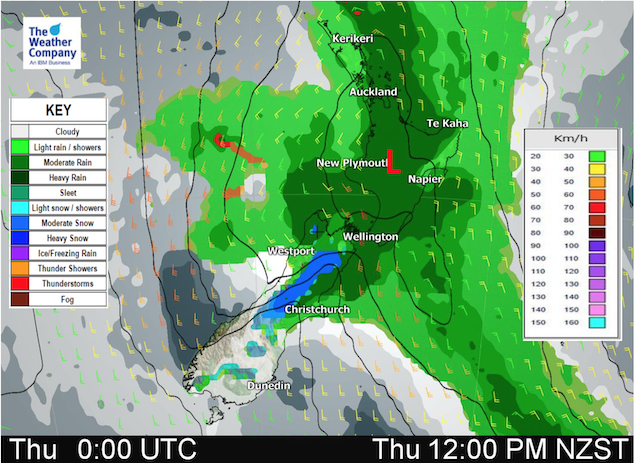 An occluded front deepens into a low pressure system over or near the North Island today bringing unsettled weather to most of New Zealand. The best weather will likely be about South Westland.

Northland, Auckland, Waikato & Bay Of Plenty
Rain with heavy falls possible about Northland spreading elsewhere during the morning, easing during the afternoon for most as northeasterlies tend to the west. Sunny spells may break through at times this afternoon for Northland and Auckland. Rain not picking up about Bay Of Plenty till afternoon then easing there in the evening, winds staying from the north or northeast all day.
Highs: 14-17

Marlborough & Nelson
Rain with south to southeast winds picking up in the morning, strong about coastal areas (gale about the Sounds and through Cook Strait). Snow to 700m. Rain may clear Nelson in the evening.
Highs: 10-13

Canterbury
Rain, easing to showers by midday near the coast and not till evening further inland. Snow to 300m for South Canterbury up to 500m for North Canterbury. Cold southerly winds.
Highs: 5-10

West Coast
Morning showers then afternoon sunny areas break through near the coast, further inland about the main divide expect rain to ease during the day to showers by evening (snow to 500 or perhaps 400m). Gusty southeasterly winds.
Highs: 9-13

Southland & Otago
Cloudy areas about Southland and coastal Otago, the odd spit or shower. There may be a few light snow flurries to 300m but nothing of significance. Central Otago is mainly dry after any morning showers clear, some afternoon sun may break through but not a warm day by any means. Cold southerlies tend easterly in the evening.
Highs: 5-9