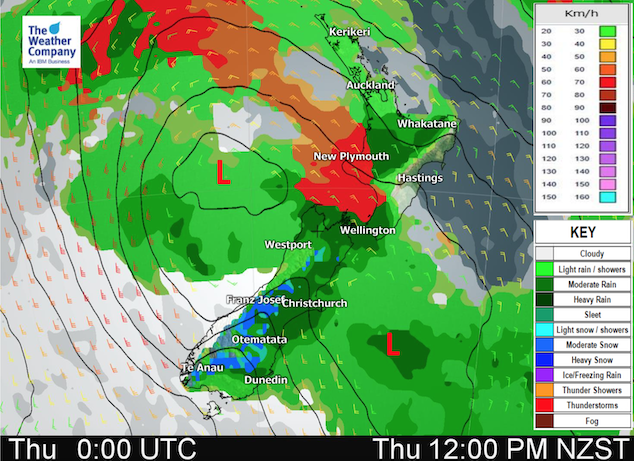 Northland, Auckland, Waikato & Bay Of Plenty
Showers, there may be the odd isolated heavy fall / thunderstorm (especially in the afternoon). Sun breaks through at times. Breezy northwesterly winds.
Highs: 17-19

Western North Island (including Central North Island)
Showers, some may be heavy at times with thunderstorms (especially Taranaki). Rain moves in late evening or overnight as north to northwesterly winds change southeast.
Highs: 12-17

Eastern North Island
Mostly sunny with north to northwesterly winds, the odd spit about Wairarapa spreads from the west then becoming more persistent from mid afternoon as southwesterly winds start to freshen.
Highs: 16-21

Canterbury
Some rain, easing at night. Snow gradually lowers to 500m, perhaps lowering further to 300m overnight but at that stage it will just be a few flurries. Freshening southwesterly winds, strong at times from afternoon about the coast.
Highs: 8-11

West Coast
Rain eases then clears during the afternoon with some sun breaking through, perhaps not clearing Buller till evening. Southeasterly winds.
Highs: 13-16

so there is a risk of thunder in auckland.

May from tomorrow afternoon but any storms may be just to the north of Auckland and into Northland, depends on the exact positioning of a low moving over at the time. We’ll have to wait and see!

ok. im just like jet. i really want a thunderstorm to come to auckland.

only had one so far this year. i want more. speaking of jet there have been some thudnerstorms down there i believe.

metservice thunderstorm outlook has low risk for northland and auckland. bet that might change. i am hoping for a thunderstorm before this low pressure is through.