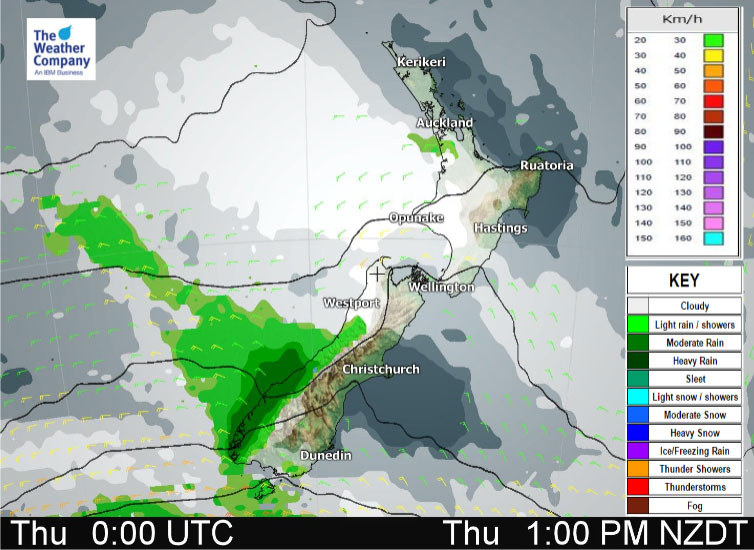 A west to southwesterly airflow lies over New Zealand today. A few fronts slide northwards over the country bringing some rain or showers in the west, dry weather out east.

Northland, Auckland, Waikato & Bay Of Plenty
Southwesterlies freshen in the morning bringing increasing cloud and a few showers, drying out from afternoon although the odd shower may still affect western coastlines. The Bay Of Plenty has a dry day with morning sun then some afternoon cloud.
Highs: 18-22

Western North Island (including Central North Island)
Cloudy areas, expect a shower or two also mainly for Taranaki and Kapiti then clearing in the afternoon. West to northwesterly winds.
Highs: 16-19

Eastern North Island
Mostly sunny, expect some high cloud to develop during the morning. Winds are light from the north, perhaps tending northeast in the afternoon about the coastal fringe of Hawkes Bay and Gisborne.
Highs: 20-24

Southland & Otago
A mix of sun and cloud about Southland with west to northwesterlies increasing, evening showers. Otago has a mostly sunny day after some morning high cloud clears, risk of an overnight shower as northwesterly winds change southwest.
Highs: 18-25