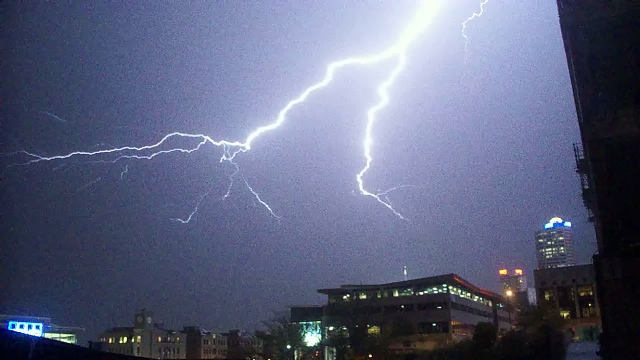 Hundreds of lightning flashes have been detected along the west coast of New Zealand in the past hour according to the Lightning Tracker at WeatherWatch.co.nz.

In the past 60 minutes the number of strikes has almost doubled to nearly 800.

“Very impressive thunderstorm over Greymouth at the moment, we have been having them on and off most of the day but this one is the best so far…now its hailing too” wrote Juliet Oates a short time ago on WeatherWatch.co.nz’s Facebook page.

The thunderstorms are now moving into the North Island.  “Had a few decent flashes in Levin a short while ago, now the wind and rain really starting to pick up” says Andrew Blair.

WeatherWatch.co.nz says there is a high chance of thunderstorms and hail right up the west coast of New Zealand tonight and overnight, including Auckland, as a cold change comes through.

Auckland’s high tomorrow will be down 4 or 5 degrees on today as the cold change comes through.

WeatherWatch.co.nz also says there’s a moderate risk of an isolated small tornado along the west coast of the country overnight with the risk easing easing later during Friday morning.

The increased thunder activity is because of a large storm still churning south of New Zealand.  It’s expected to remain there until at least mid next week.

At 1:51am this morning I woke just as a huge flash of lightning struck close to Westown New Plymouth. By the time I had said Ooops this is guna hurt there was the loudest clap of thunder i have ever herd. It sounded like one of those light sabours off the star wars movie. Amazing sound, windows rattled and house shook.

Oh man!!! Im so jealous of west coasters right now. We got nothing in Tauranga. Lightning tracker looks impressive.

Hi Phillip
Out in Army Bay with clear skies, can see the stars, we are observing blue and yellow flashes coming from the sky with absolutely not a cloud in the sky out here. Just wondering – do you think that this could be piezoelectric effects coming from the earth? http://www.physicsforums.com/showthread.php?t=181035 Please do not post this to the forum if you think it may alarm people. Thank you.

HI Phil
Here is another peer reviewed scientific journal article for the scientists out there re this phenomena. Would love to see what others think. http://www.waset.org/journals/waset/v13/v13-5.pdf Could this lightening be coming from piezoelectric/electromagnetic activity due to the earthquakes of this week and perhaps not just weather orientated?
Cheers

22.00 hours….From Paeroa I can see lightning in the far distance…no rumble. I hope we get some good thunder and lightning overhere.

man – it looks like someone is scattering confetti all over the country on the lightning tracker!