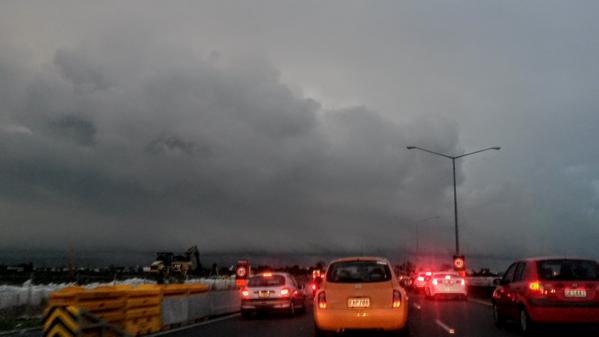 A dramatic thunderstorm has rumbled across Auckland late Tuesday afternoon and early evening.

Lightning and thunder had been going nonstop since about 4:30pm to 6:30pm – as the cells tracked southwards.

More thunderstorms remain out in the Tasman Sea, although aren’t expected to be as intense overnight.

Check out the Lightning Tracker on our website – it’s free for all NZers to use.

Social media has lit up with photos and comments.

@WeatherWatchNZ can see the Waitakeres getting it right now. Some big flashes pic.twitter.com/dxaIz4qZLi

This afternoon in Auckland it was mostly sunny and warm with temperatures in the low 20s, well above average for June says WeatherWatch.co.nz.  The storm clouds rolled in as WeatherWatch.co.nz predicted at about 4pm, but the showers took another 30 to 60 minutes to cross the city.

“As of 5:20pm the western side of Auckland had a severe thunderstorm while the eastern side had clear blue skies.  Considering Auckland is only one kilometre wide at its narrowest point you understand why forecasting specifically for Auckland can be tough” says head weather analyst Philip Duncan.

As forecast the thunderstorms are creating hail – some quite large (see photo).

However the main band of rain should end up affecting all of the city before 6 or 7pm – but thunderstorms may not affect all suburbs. Showers will ease by 7pm for a time.

The isolated thunderstorms will track south east tonight and may affect regions between Auckland and the middle of the North Island, although they should ease somewhat after sunset.

On Wednesday more isolated thunderstorms are expected and we’ll continue to give you clear and timely updates as they move closer.

I had been watching two particular cells at around 4pm over the Waitakeri ranges where by about 4:50pm many lightning strikes mostly sheet was displayed over the ranges moving east. The worst storm chase for me begun with filming the storm for about 20 minutes not relising that my SD card was nearlly full, so i looked at the other SDs which anoyingly were full too! so i was then left to just watch and comprehend the great thunderstorm. Also i then went to my dad to take me for a drive to get better sight of the storm, but he refused. leaving me with nothing to make todays influence on how strong these storms were raging. Auckland in my personal experiece in my 13 years of life hasnt had storms like this active for about 5 years or so. Infact Auckland storms are so poor i really only get to storm chase around 1-2 times a year or even none! All i can say about today is that Auckland had a beuatiful band of well matured thunderstorms and i had a bad day trying to cover them with filming…

Hey Zachary, great to hear from you. These sure were awesome thunderstorms – up there on international standards for intensity (although still nothing like the ones they get in Queensland even!).  Agree with you, Auckland hasn’t had a good run of thunderstorms for over 5 years, if not longer.

Chance of a few thunderstorms on Wednesday too, although unsure where exactly they will be until they start to move in towards land because they change shape so much out at sea.

Doesn’t appear to be working very reliably for this storm. I have seen many flashes around Auckland but none are showing up in realtime. It’s showing only dectections 5 in the last hour in a wide area centered on Auckland (Wellsford to Port Waikato).