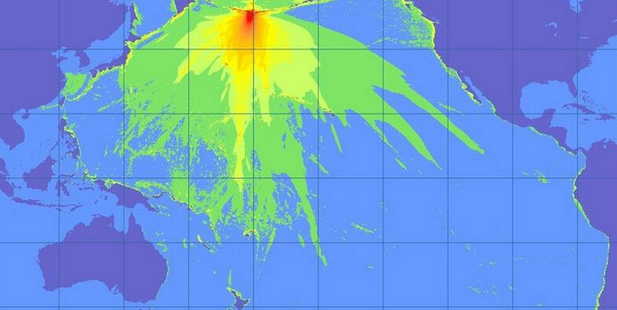 There were no immediate reports of damage.

Two quakes, with magnitudes of 6.9 and 6.3, hit within minutes of each other, according to USGS data. The larger of the two was originally reported by the USGS to be a 7.2-magnitude, but that measure was later downgraded to 6.9.

The quakes hit near the eastern edge of the Australian tectonic plate, one of the most active seismic regions in the world, according to the USGS.

The quakes all a depth of about 12 miles, and happened about 50 miles southeast of Raoul Island.

All tsunami advisories have been canceled following a magnitude-7.9 earthquake.

The National Tsunami Warning Center has canceled the last remaining advisory. At one point, areas stretching from Attu to Unimak Pass were under a tsunami warning or advisory, but the largest reported wave was about 18cm.

The advisory area included Unalaska, a community of about 4,000 people and home to Dutch Harbor, one of the nation’s largest fishing ports.

The quake struck today and was widely felt in sparsely populated villages in an area about 2253km southwest of Anchorage.

The earthquake was initially measured at magnitude 8.0. But scientists have downgraded that now to 7.9 after having time to review the data.

The National Tsunami Warning Center, which initially issued a warning that significant inundation was possible, had earlier kept advisories in place for parts of the sparsely populated islands, saying conditions could be dangerous to people near the water.

“There could be strong currents, but still stay away from the beach,” said Dave Nyland, a geophysicist at the warning center.

Residents in some communities like Adak, which were first in line for the tsunami, did evacuate.

“We’re seeing water leave our bay, so we do have everybody up on the Bering Hill area, where our primary evacuation center is at,” City Manager Layton Lockett told The Associated Press by telephone as he gathered some paperwork before heading out to join about 300 residents at the center.

About 322km west, a tsunami wave of about 18cm was reported at Amchitka Island, Zidek said. They wave diminished the further it traveled, reaching only a couple of centimeters at Adak and Shemya.

But the earthquake was widely felt in Adak, one of the largest cities in the affected area. Shaking could also be felt in Shemya and other villages along the island chain.

Shemya Island is where the US military operates Eareckson Air Station, which serves mainly as an early warning radar installation. Air Force officials said there was no damage to the air station.

Amchitka Island is where the government tested nuclear weapons underground in the 1960s and 70s. The tests included one of the United States’ largest nuclear explosions.

Today’s earthquake was initially reported with a magnitude of 7.1, but that was upgraded to 8.0, before the revision to 7.9. Natasha Ruppert, a seismologist with the Alaska Earthquake Center, said were several strong aftershocks, with magnitudes ranging from 3.5 to 5.9. Nyland said those would be too small to trigger a tsunami.