This is the first ever photo of a black hole 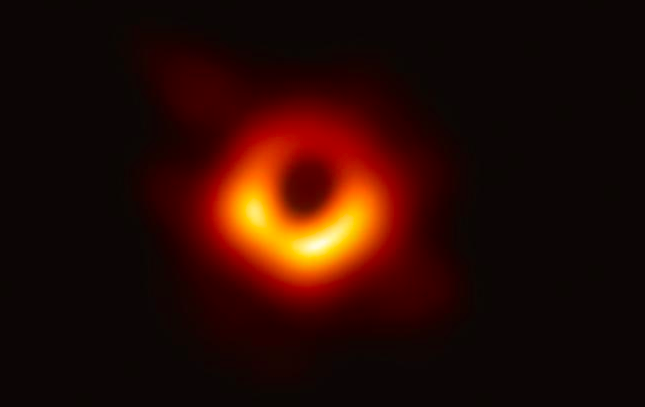 In April 2017, scientists used a global network of telescopes to see and capture the first-ever picture of a black hole, according to an announcement by researchers at the National Science Foundation Wednesday morning. They captured an image of the supermassive black hole and its shadow at the center of a galaxy known as M87.

This is the first direct visual evidence that black holes exist, the researchers said. In the image, a central dark region is encapsulated by a ring of light that looks brighter on one side.
The massive galaxy, called Messier 87 or M87, is near the Virgo galaxy cluster 55 million light-years from Earth. The supermassive black hole has a mass that is 6.5 billion times that of our sun.
“We have seen what we thought was unseeable,” said Sheperd Doeleman, director of the Event Horizon Telescope Collaboration. “We have seen and taken a picture of a black hole.”

The black hole image captured by the Event Horizon Telescope Collaboration.
The Event Horizon Telescope Collaboration, called EHT, is a global network of telescopes that captured the first-ever photograph of a black hole. More than 200 researchers were involved in the project. They have worked for more than a decade to capture this. The project is named for the event horizon, the proposed boundary around a black hole that represents the point of no return where no light or radiation can escape.
In their attempt to capture an image of a black hole, scientists combined the power of eight radio telescopes around the world using Very-Long-Baseline-Interferometry, according to the European Southern Observatory, which is part of the EHT. This effectively creates a virtual telescope around the same size as the Earth itself.
The telescopes involved in creating the global array included ALMA, APEX, the IRAM 30-meter telescope, the James Clerk Maxwell Telescope, the Large Millimeter Telescope Alfonso Serrano, the Submillimeter Array, the Submillimeter Telescope and the South Pole Telescope.
– VIEW more about this story here via CNN International