The weekend is nigh, or is that “high?” 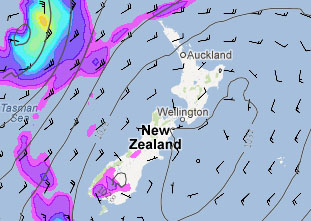 Indeed this weekend’s weather will be dominated by a fairly beefy anticyclone sitting just east of the country, with a centre at 1032 to 1034 hectopascals. Generally speaking we are in for settled weather and for the most part Saturday and Sunday will sing the same tune weather wise.

It will be sunny in most regions with a northeasterly airflow, there may be some cloud at times particularly morning and night along eastern coastlines. Northland will receive a higher chance of cloud with a slightly fresher easterly airflow there, there is even the chance of the odd shower at times in the east. In South Westland and Fiordland there will be cloudy areas and in Fiordland a few drizzle patches or showers now and again, Saturday may be a little brighter though in South Westland.

During the afternoons and evenings there is a chance of a few isolated afternoon showers mainly about Southland and Central Otago but possibly near the ranges up through the centre of the South Island also.

A chance of light frosts during the nights in inland areas of both Islands and near the coast in the east where skies are cloud free and the northeasterly breeze drops out.

Perhaps not time to crack the barbeque open just yet as the evenings will be a little cool still but then again I have them in winter as you just can’t beat a bbq.