The week ahead – mainly settled then an incoming tropical low 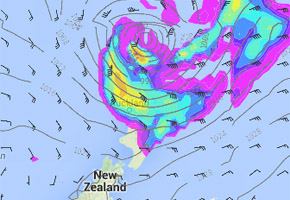 The whole of this week will mostly be dominated by anticyclones and settled conditions, so that is rather nice. Doesnâ€™t mean totally sunny skies every day for all regions, some areas may see areas of cloud particularly morning and night. Once Friday comes along there could be some significant change, a very deep tropical low that will likely be an ex tropical cyclone looms just north of the North Island ready to move south.

For a wrap of conditions today check out this mornings
national forecast here.

Tomorrow is very settled with light winds and afternoon sea breezes for most, areas of morning cloud along the east coast of the South Island break to mostly sunny weather however watch for further cloud
again in the evening.

Wednesday doesnâ€™t change too much although there are some differences. A high will still mostly cover the country but an incoming front from the southwest starts to squish up isobars over the South Island. Weather-wise the
North Island is mostly sunny with light winds and afternoon sea breezes once
again, east to southeast winds prevail about Northland from afternoon however.
Some evening cloud moves in then there is the chance of a light shower or two
overnight in the east.

In the South Island morning cloud along the east coast clears then expect mostly sunny weather with northeasterly breezes. Mostly sunny about the top of the Island and along the West Coast with light
westerlies, some cloud builds about Fiordland from afternoon. Southland stays
mostly sunny with light winds, northwesterlies pick up from evening however.
About the interior of the South Island northwesterlies pick up from evening
also.

On Thursday anticyclonic conditions remain supreme, the front about
the far south of the South Island quickly weakens in the morning. So for the
South Island expect mostly sunny weather, light winds and afternoon sea breezes.
Fiordland can expect some rain however. About Southland northwesterly winds
change westerly in the morning bringing some cloud and the chance of a brief
shower then becoming mostly sunny in the afternoon.

For The North Island expect northerly winds in Wellington with mostly sunny weather, east to
northeast breezes along the east coast with mostly sunny conditions too. North
of Gisborne may experience cloudy skies however with the chance of a light
shower or two. Sunny spells and some cloud in the west south of Taranaki,
westerly winds. For the Upper North Island expect an easterly airflow to start
to build, conditions will be mostly sunny for the majority however Northland can
expect cloudy skies with the odd light shower in the
east.

Come Friday and things start to get interesting weather wise. The South Island is mostly sunny with light winds about Nelson, along the West Coast and about the lower South Island. Canterbury and
Marlborough see increasing easterly breezes. For the east coast of the North
Island east to southeasterly winds strengthen during the day, skies becoming
cloudy in the morning for all with the odd shower north of Gisborne spreading
south in the evening, rain moves into East Cape overnight with gale
southeasterlies developing.

Mostly sunny weather for Wellington and along the west coast Taranaki southwards with southeasterly winds strengthening during the day, some high cloud thickening from afternoon. For the Upper North Island
expect strengthening east to southeasterly winds, cloudy skies from morning,
rain develops during the afternoon becoming heavy overnight. Winds rising to
gale overnight too.

Keep in mind the situation for Friday is likely to change as tropical lows often change their track in weather models but we know the potential is there. Keep up to date with the situation this week at
WeatherWatch.co.nz

What is the likelihood of getting rain in Taranaki? We gave womad!!

Hi there – currently a 60% chance and increasing.  Windy easterlies moving in too.  All the best!

At this stage, are the indications that the worst of this sytem will be moving reasonably quickley across or past the top of the north Island, albeit the after effects weather-wise lingering for a day or two?

HI there – at the moment most of the models are showing it will rush down to the North Island late Fri/early Saturday then linger for the weekend as it slowly falls apart.  Keep an eye on our rain maps above for the latest on the what the models are saying.

I’m due to get married on Sunday 16th on the island. it potentially could be re-scheduled?

all the guests arrive on sat.

would you go ahead or look to re-schedule?

Hi Alex – we can’t make that call for you but based on the current data is look as htough Sunday will be unsettled – but potentially improving for some (while going downhill for others).  We are not yet ready to lock in a forecast for the weekend – so keep checking back with us and MetService over the next couple of days.

Keep an eye on the Fiji Met Service website for progress of this cyclone. They already forecast it to be Cat 2 when south of Fiji.

How far out will we know if this will hit or not … days /hours ?

Hi Tracey – we are feeling pretty confident of it hitting around Friday or Saturday in the upper North Island.  Will know for certain within 48 hours but at the moment it’s looking moderate to high chance of happening.