Home > News > The town missing half its people...

The town missing half its people 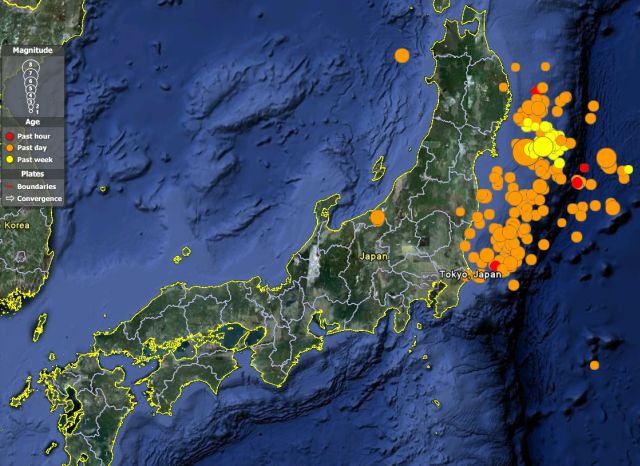 More than 900 people were killed and about 700 were missing, Japanese public broadcaster NHK reported. The number of dead is expected to rise as rescuers reach more hard-hit areas.

In the town of Minamisanriku, 9,500 people are unaccounted for, Japan’s Kyodo News Agency reported, citing local officials. That figure is more than half the population of the town, which is located on the Pacific, the news agency said.

International help for Japan “We’d first like to focus on saving lives and secondly the comfort of the evacuees,” Kan said. “There will be many resources that will be needed for this evacuation process.”

Aftershocks continued to jolt the island nation Saturday, including two at 6.1 and 6.4 magnitude.

Kan visited areas of northeastern Japan affected by the quake and tsunami Saturday, according to Kyodo News Agency. He visited a nuclear plant in Fukishima that was affected by the disaster, and inspected other areas from the air.

In the city of Shirakawa, south of Sendai, rescuers dug through rubble with shovels to try to reach 13 neighbors trapped when the earth opened up and swallowed their homes.

Relatives and friends stood in the cold, quietly watching, praying and waiting. Others wept.

In other affected areas, military choppers plucked people from rooftops. In some cases, rescuers trudged in muddy water, carrying survivors on their backs. Weary, mud-spattered residents wandered through streets filled with crumpled cars and other debris.

The original quake struck Friday and left towns and villages along the northeastern coast devastated. Scores of aftershocks followed Saturday.

“The earth shook with such ferocity,” said Andy Clark, who experienced the main earthquake at Narita Airport near Tokyo, about 370 kilometers (230 miles) southwest of the quake’s epicenter. “I thought things were coming to an end. … It was simply terrifying.”

Six million households, more than 10% of the total in Japan, were without electricity, said Ichiro Fujisaki, the nation’s ambassador to the United States.

Central Tokyo resident Michelle Roberts said people are accustomed to earthquakes in the area, but this was different.

“I wasn’t scared when it started … but it just kept going and going,” Roberts said. “I won’t lie, it was quite scary. But we are all OK. We live on the third floor, so most everything shook and shifted.”

Roads in affected areas were jammed as residents — thousands of whom had spent the night in shelters — tried to get to their homes in outlying areas. Others flocked to nearby shops to buy supplies amid increasing concern over food and fuel shortages.

Tokyo resident Nicky Washida said she was on the way to work, bicycling over a bridge, when the quake struck.

“The ground was heaving and rolling, and I looked around but there was just nowhere to run,” she wrote in an iReport. “The noise was terrible — metal clanging and scraping, and banging noises like concrete being dropped from a great height. I was … going over part of Tokyo Bay, and I just cycled as hard as I could to get off the bridge because it felt absolutely like it was going to collapse (at) any moment.”

The Japanese government made a formal request for U.S. aid, including military support, and full planning for deployment is in effect with the U.S. military in Japan taking the lead, according to Sgt. Maj. Stephen Valley with U.S. Forces Japan.

The III Marine Expeditionary Force, based on the island of Okinawa south of Japan, said it was sending support staff, a cargo aircraft and transport helicopters. “Additional aircraft and supplies will continue to be moved in the next several days,” the unit said in a statement.

The U.S. Agency for International Development said Saturday it had sent a rescue team to the nation to help with rescue efforts.

Online search engine Google said it has launched an online database to help people in Japan find their friends and relatives. The service collects information about the location and condition of people affected by the disaster.

A blast at the Fukushima Daiichi plant injured four workers and crippled the plant’s cooling systems, according to Japan’s nuclear and industrial safety agency. The explosion sent a plume of white smoke into the air.

The explosion was not caused by the nuclear reactor but by “water vapor that was part of the cooling process,” Chief Cabinet Secretary Yukio Edano said Saturday. No harmful gases were emitted by the explosion, he said.

“A tsunami far exceeded what had been expected,” Kan said, and “some backup operation problems occurred” at the reactor, according to Kyodo News Agency.

Authorities have evacuated people living 20 kilometers (12 miles) from the reactor, according to the prime minister.

The United States said that while Japan has officially sought its help in dealing with the earthquake’s aftermath, it is not involved with efforts at Fukushima and Japan has not made requests for help at the nuclear plant.

The impact of the quake was felt far and wide.

On the U.S. mainland, wave heights from Alaska to California ranged from less than a foot to more than 8 feet. The highest measurement, 8.1 feet, was at Crescent City, California.

In McKinleyville, California, three men were swept away by waves while taking pictures of the Pacific Ocean, according to the U.S. Coast Guard. Two returned to shore, but one died.

Hawaii Gov. Neil Abercrombie signed a “state of disaster proclamation” after the tsunami caused millions of dollars in damage. The proclamation will allow the state to get federal funds to rebuild, the governor said in a statement.

The quake was the latest in a series around Japan this week.

Friday’s quake is the strongest earthquake in recorded history to hit Japan, according to U.S. Geologic Survey records that date to 1900.

The world’s largest recorded quake took place in Chile on May 22, 1960, with a magnitude of 9.5, the USGS said