The latest conditions across NZ 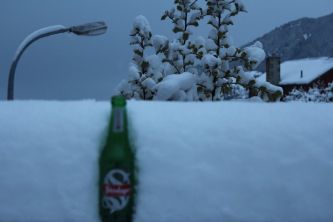 As we hit day four of our winter storm many areas are still facing bitterly cold winds, sleet rain and even snow to sea level – but many others are seeing the sun.

In Christchurch some snow is falling off and on across the city with heavier falls well inland.  Weather analyst Richard Green says there have been a few power outages too across Canterbury as a result of the snow.

WeatherWatch.co.nz says the temperature right now in Christchurch is 2 degrees with a wind chill of minus 4.

But, despite the snow flakes, conditions are generally improving.

The intensity of the showers has significantly eased across more than 80% of New Zealand and while sleet and rain/snow showers are continuing to affect some coastal parts of Canterbury the centre of the storm is moving away.

Head weather analyst Philip Duncan says the centre of the low is now 2500kms south east of Christchurch and moving eastwards away from New Zealand.  He says a secondary low will form just east of the Chatham Islands tomorrow causing conditions to linger a little longer.  “The main event has well and truly passed now but we’re still being affected by the tail end, so more heavy snow down to a few hundred metres from Canterbury to Hawkes Bay and wintry, sleety, conditions to sea level”.

He says the secondary low won’t add too much more to the weather here but will just keep “today’s weather in place until Thursday”.

In Wellington the snow level has lifted but a gale force southerly continues to blast through.  It’s currently 7 degrees with a feels like temperature of zero in the wind.

In Auckland a thin veil of high cloud and a fairly light southerly are the only signs that a winter storm was nearby.

By the weekend the large high partially responsible for the winter blast will move in and settle across New Zealand for the first half of next week.

WeatherWatch.co.nz says by the end of next week temperatures will be back to average or even above average if a warm northerly air stream from the sub-tropics eventuates.  This is currently being predicted by some long range models – we’ll keep you posted!

– Image — I’ll have my beer ice cold thanks! / Amie Saxton

I have been watching next week as well & it does look fairly likely that a NW change could get to us late in the week. I hope so anyway, that will make everyone feel a lot better around the place after this cold snap.

The big high looks as if it will dig in though so it will be interesting.

Hi, any idea of the snow depth in places like Darfield, Springfield and Oxford?  Seems like it must have been snowing out there for the best part of two days now.