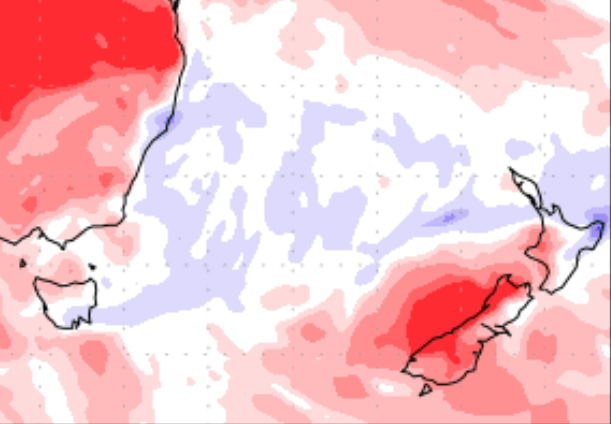 We’ve past the shortest day, now we’re heading into ‘true winter’ but the weather pattern may feel more like Autumn still for northerners.

Following a wet, or dry and cloudy, weekend in many northern areas this week will see a brief pause with drier and sunnier skies – before cloud, showers and rain returns again by mid to late week, this time from a large area of low pressure in the Tasman Sea – with some sub-tropical connections.

Rainfall totals will be welcome in these areas though.

Meanwhile it’s frosty and cold at the other end of New Zealand today thanks to high pressure and clear skies.

NEXT 7 DAYS COMPARED TO NORMAL:
Rainfall for the next week will be below normal (in red) for the South Island, while some parts of northern New Zealand (in blue) have wetter than usual weather. As you can see around Northland and Auckland it’s a bit broken between ‘average rainfall’ (in white) and the leaning wetter than normal. To make sense of this for your specific area, please use the rain graphs and detailed data at www.RuralWeather.co.nz

HOW JUNE ENDS, HOW JULY STARTS:
High pressure dominates the South Island until about Thursday then slips away to some degree – but you’re left with average air pressure so apart from a few showers there’s no dramatic change this week.

The North Island will see low pressure from the Tasman Sea start to move in about Wednesday/Thursday onwards. The high over the South Island will create a “squash zone” of easterlies in the lower North Island/Cook Strait area on Thursday.

This weekend the low departs out to the east and stalls there – meanwhile the next high from Tasmania area is yet to move in. This set up will create a colder nationwide southerly for the start of next week, driving wet weather into eastern areas of both islands (perhaps more so the North Island) and bring a colder start to the country for July 1 (with more frosts again in the south).

yay more rain is on the way. exciting. grass is green even more. droughts soon should end but water crisis may not.