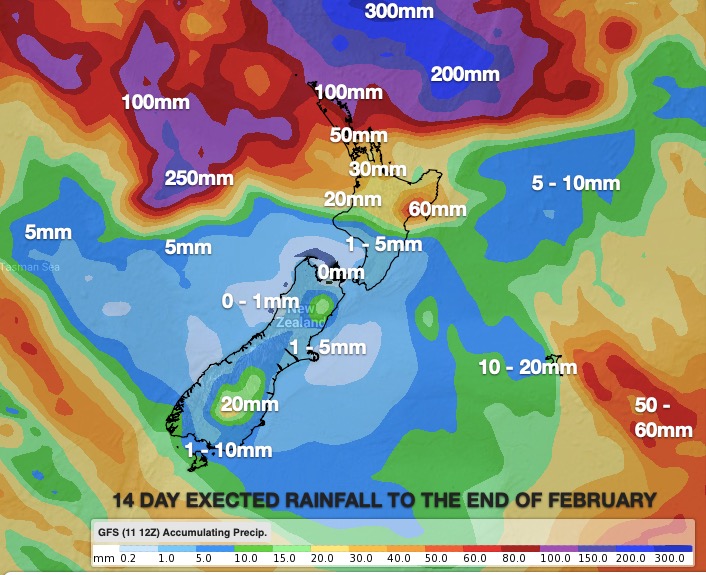 7 day + 14 day rainfall outlook —- Some rain is coming next week but high pressure will once again be pushing back against it. Parts of New Zealand are now well into their second year of rainfall deficit and increased high pressure is to blame.

Next week La Nina fuelled low pressure tumbles down from the tropics to NZ but it’s southern progress is halted by high pressure further south – which will be expanding next week.

This means, yet again, rain that is trying to penetrate into dry northern NZ will be torn apart by more powerful high pressure further south. This is fairly normal behaviour in the peak of summer but after two plus years of this pattern it’s starting to change the look of the landscape now.

The Far North, Northland and Hawke’s Bay look to have the better chances of rain next week. There’s a fine line between very heavy tropical rain north of NZ (300mm+ in the next 14 days) compared to central NZ where air pressure may be so strong some areas record 0 to 5mm for the rest of February.

“I said this in our weather video a week ago, that the default setting now is that dry high pressure wins over the rain events, it tears these lows apart and keeps NZ mainly dry” says head forecaster Philip Duncan. “We’ve seen this demonstrated repeatedly over the past two years. This wasn’t the case prior to this new climate pattern”.

“The low next week shows a chance of bringing in some soaking rains but isn’t locked in due to the dominating high pressure belt. The rain next week is critical and if it fails to arrive then this will shift things up a gear as far as drought conversations go”.

For more rain data (the most in NZ!) visit www.RuralWeather.co.nz