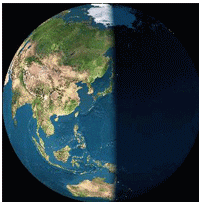 Monday is a special time in astronomy. This is when the sun’s direct rays are crossing over the Earth’s equator from the southern hemisphere to the northern hemisphere.

Okay, that’s great but what does it mean? It means that the equinox is here, and astronomically speaking, autumn has officially begun in the Southern Hemisphere under the astronomical calendar.

Twice a year, around March 20 or 21 and September 22 or 23, the sun’s most direct rays shine on the equator. These two days are known as the vernal (spring) equinox and the autumnal (autumn) equinox, respectively.

During the equinox, nearly equal amounts of daylight and darkness are experienced throughout the world.

Instead of a tilt away from or toward the sun, the Earth’s axis of rotation is perpendicular to the line connecting the centers of the Earth and the sun during an equinox.

During the equinox, both day and night are balanced to nearly 12 hours each all over the world.

Good news for those in the northern hemisphere: Daylight continues to grow longer until the summer solstice, which occurs on Wednesday, June 21.

The opposite occurs in the southern hemisphere, where daylight continues to shrink.

Quite informative. Refreshed much of my austromy knowledge