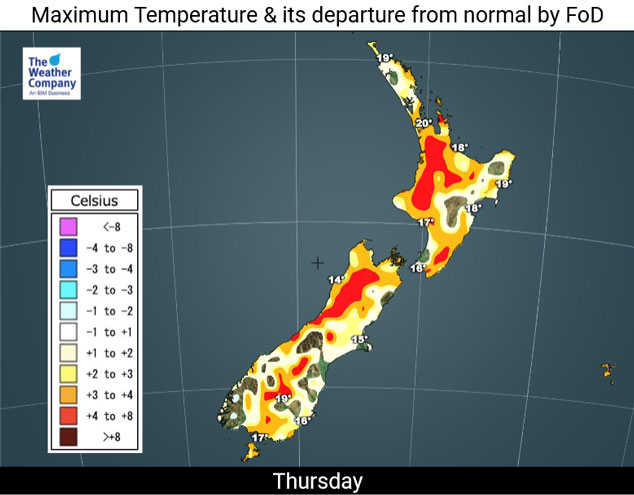 A warmer than normal trend for tomorrow’s temperatures around New Zealand, inland parts of the South and North Island between 4 to 8 degrees above normal. Coastal areas generally speaking are mostly just sitting on average or a touch above due to onshore winds providing a slightly cooler touch.

Tomorrow’s high will likely be 21 to 22 degrees about the Waikato but many other spots won’t be far behind. Wellington and coastal Otago are the coolest on around 16 degrees.

Generally settled for New Zealand on Thursday night apart from some shower activity north of around Auckland. Temperatures should stay away from any frost activity, the inner South Island may get a little cool (between 3 and 4 degrees) but we are getting on a bit in the year now heading towards summer for frosts to occur much now. Frosts would only occur now if there was a cold easing southerly with a ridge coming in behind.