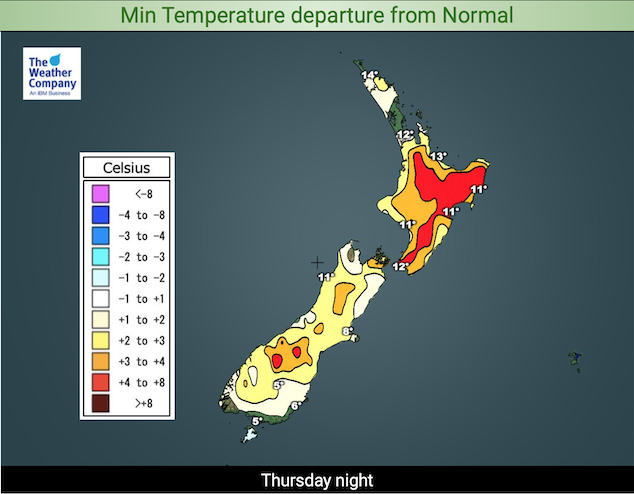 A northwesterly airflow brings warmer than average overnight lows to much of the North Island tonight, especially in the east. Kaitaia gets the warmest overnight low for the whole country only getting to 14 degrees.

In the South Island expect northwesterlies for the upper half and southerly quarter winds about the lower half. There is enough disturbance in the atmosphere to keep temperatures dipping below zero. In saying that some inland areas may get a bit cool, lows of 2 to 3 degrees are possible about some parts of Central Otago and the Mackenzie Country.

Warm for most of the North Island on Friday, especially along the east coast where temperatures reach into the low twenties. Cool southerlies for the eastern South Island keep temperatures a bit down about the fringes, where winds don’t penetrate too far inland highs are warmer than average but cloud cover or rain / showers will make it feel fairly average or even a bit cool. The coolest spot tomorrow will likely be Dunedin on 11 degrees.

Traditionally July and August are the two wettest months and this year July delivered 122ml and August currently 9ml off the back of a severe Hawke’s Bay drought – nervous would be the word.