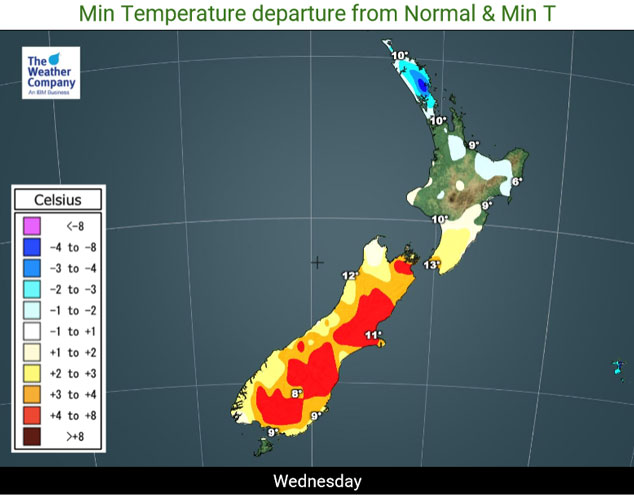 A warmer than average night ahead for the South Island and lower North Island tonight due to a strong west to northwest airflow. Northland clings on to some high pressure so will have clear skies and light winds resulting in cooler than average overnight lows. Wellington will likely pip everyone else in terms of the warmest overnight low but there is a chance if the northwesterly influence is strong enough somewhere about coastal Canterbury or perhaps Marlborough may actually end up being a touch warmer.

Tonight’s coldest lows will be somewhere between the Central Plateau and Gisborne getting down to between 4 and 6 degrees.

Strong northwesterlies continue on Thursday and so do warmer than average temperatures in the east, highs reaching into the late teens or early twenties are likely. Southland gets the coolest high reaching 11 as a southwest change and rain moves in there during the morning, this reaches Otago early afternoon bringing a cool down there.