Temperature trends – mild in most places, but frosty tonight in far south 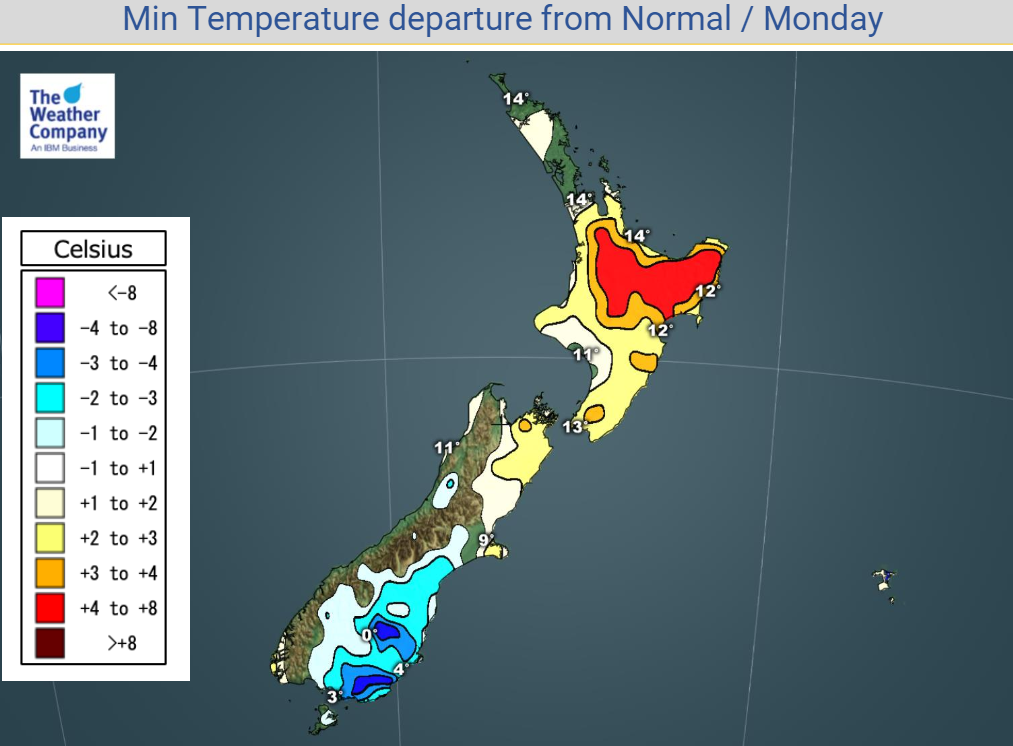 Wind, cloud and rain will conspire to ensure the first night of the 2020 meteorological winter is a fairly mild one across about two-thirds of the country.

With an intensifying anticyclone over the Chatham Islands, and a small but tightly isobar-packed depression tracking southeast towards Northland tonight, a sub-tropical northeasterly airflow will help keep minimum temperatures warmer than normal for the start of June.

The airstream’s influence will be felt across most of the North Island and down the east coast of the South Island to about the Waitaki River.

Overnight lows throughout the North Island will generally be 3degC or more higher than average, particularly in those areas of the Waikato across to East Cape where wind and rain will be peaking about sunrise, usually the coldest time of day.

The northeast of the South Island will be generally cloudy with a nor’east breeze, which means minima there are likely to be at least a couple of degrees milder than normal.

However, from about Timaru south, where high pressure is still dominating but there is less wind, another frosty night is likely, especially inland. Some basins could be as much as 5degC colder than the average.

Queen’s Birthday Monday will be milder than normal across almost all New Zealand, as the influence of that northeasterly wind – more northerly in the far south – continues to be felt.

Whether it’s rain, wind or thick cloud, temperatures throughout the North Island will generally be 2degC to 3degC up on normal.

Inland and western areas of the South Island will have generally sunny skies and light winds and a very mild afternoon for there considering the time of year, with temperatures up to 5degC or 6degC warmer than usual.

I’m just confused that winds, rain, and clouds makes it warmer! I thought they make it cooler not warmer! Or is it just in this case?

It’s all about the big set up across the entire country and region. Weather that comes from the north is mild, weather from the south is cold.This is coming from the east and north east (so milder for Auckland, even if still cold for some). Our latest weather video explains where the weather is coming from today.
-WW