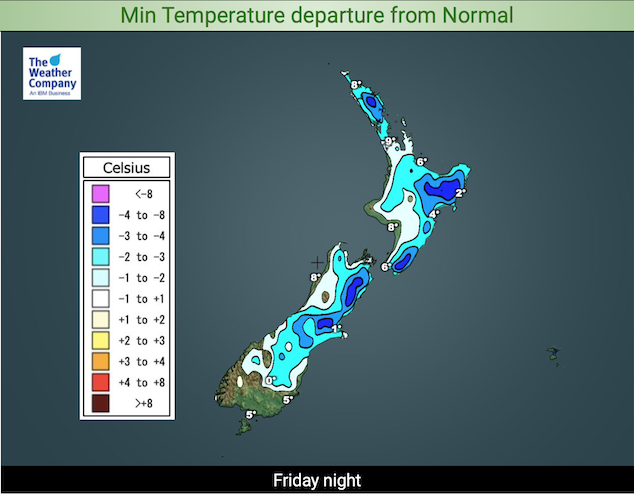 As shown in the map below many parts of the South Island and some inland eastern parts of the North Island dip below freezing overnight. Although expect frosty conditions to be a bit more extensive than this map shows, most of Canterbury including the Plains should see frosts, same goes for Marlborough down to the coast.

The frosty part of the North Island will be a little bit bigger than what is shown in the map below also reaching a little closer to eastern coastal fringe areas (perhaps not right to the coast but close!). Frosty conditions may also extend into inland Bay Of Plenty a little more.

As can be seen below many parts of the country are colder than average tonight, Southland however with some cloud cover and wind keeps frosts at bay. The coldest overnight lows will likely be about the Mackenzie Country (Canterbury) dipping down to -4 or perhaps -5 degrees. The warmest overnight lows will be in Northland around 8 to 10 degrees, in saying that some inland parts of Northland may still reach a chilly 5 or 6 degrees.

Starting to warm up a little for the South Island on Saturday due to the airflow tilting to the west. Nothing over the top but highs may touch 14 degrees for parts of North Otago and Canterbury nearer the coast. The West Coast and the North Island are a little more on the average side.