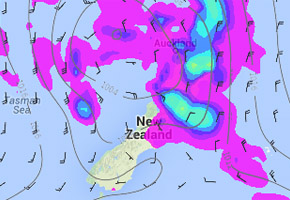 This weeks main focus is a low pressure system that moves out of the Tasman Sea, moving across New Zealand for a time then passing out to the east of the country mid to late this week. First off for today however conditions are quite tame under an anticyclone, for todayâ€™s weather check out this morningâ€™s national forecast here. Meanwhile a low starts to form way out west in the Tasman.

On Tuesday this low in the Tasman Sea moves closer, the North Island experiences mostly cloudy skies in the west with increasing northeasterly winds. Showers from early to late afternoon then rain moving in later in the day / overnight. The east coast and Wellington sees thickening high cloud with northerlies, a few spells
of rain develop later in the evening. About the South Island conditions are
still quite settled under a ridge of high pressure, high cloud gradually
increases for most however and later in the day showers move onto the West Coast
north of Hokitika and into Nelson / Marlborough.

Rain overnight on Tuesday / Wednesday morning may be heavy about the likes of Bay Of Plenty and
Nelson.

On Wednesday expect rain in the morning for most of the North
Island, heaviest about the Bay Of Plenty and perhaps to an extent Auckland and
the Waikato then easing to showers by midday. Winds will be light from the
northerly quarter then swinging around to the south later in the evening or
overnight as the low pressure system slowly moves from west to east across the
Island.

About the South Island expect south to southeasterly winds, areas
of morning rain or drizzle about the upper South Island mostly clearing in the
morning, sunny breaks for Nelson and along the West Coast in the afternoon.
About the Canterbury foothills, most of North Canterbury and Marlborough a
southerly airflow may keep the odd drizzle patch about for the day. Mostly sunny
about the lower South Island with light southerly quarter winds.

A south to southeasterly airflow lies across New Zealand on Thursday, mostly sunny for
western parts of the North Island with breezy southerlies. Along the east coast
expect cloudy areas and patchy showers. Mostly sunny for the west of the South
Island also, winds breezy from the southeast. Periods of cloud about North
Canterbury and Marlborough with southerly winds, the odd light shower possible
about the place otherwise dry. Mostly sunny about the lower South Island with
southerlies.

On Friday an anticyclones muscles onto the South Island bringing mostly sunny weather, any morning cloud Canterbury northwards clears away. For the North Island conditions look sunny in the west with
southeasterlies, cloudy spells continue in the east with the odd drizzle patch.