Home > News > Tasman low brings cold to OZ whilst it b... 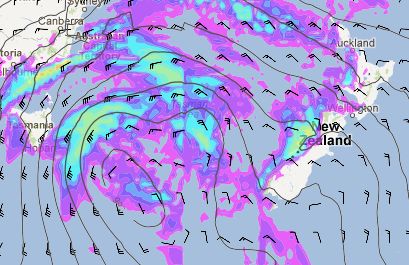 Sydney and Melbourne face a cool blast of wind, however southeastern VIC will bear the brunt of the near storm force winds.

Melburnians and Sydney-siders both woke up this morning to a minimum of 10 degrees and increasingly blustery winds. The main difference between the two cities was the cloud and rain in Melbourne that halted the usual morning warming.In Melbourne the temperature will struggle in the low teens most of the day as the showers and cloud dominate proceedings. However, during the middle of the day, the sun should poke through the clouds and add a brief touch of warmth. Conditions will feel much colder in the wind that should continue to average 30km/h through the day. A few umbrella’s will be turned inside-out by today’s weather.Sydney should have a cool and sunny day with a top of 19 degrees, although there is a chance of an afternoon shower along the coast. However, similar to Melbourne, the day will feel a few degrees colder than the mercury suggests out in the wind.Along the VIC, TAS and NSW exposed coastlines winds are much stronger than in the protected capitals. At Wilsons Promontory, Point Hicks and Cape Grim, sustained wind speeds have been recorded in excess of 80km/h. Last night Wilsons Promontory even experienced sustained wind speeds in excess of 110km/h, which is strong enough to cause widespread damage.The storm force winds have been caused by a deep low to the southeast of Tasmania combining with a high over South Australia to create a strong pressure gradient. This has funnelled cold air through Australia’s southeast and should reach Brisbane later today.The strong wind and cool weather will continue tomorrow before winds ease through the day and conditions feel warmer into the rest of the week. However, a chill should remain in the air through much of the week in Australia’s southeast.