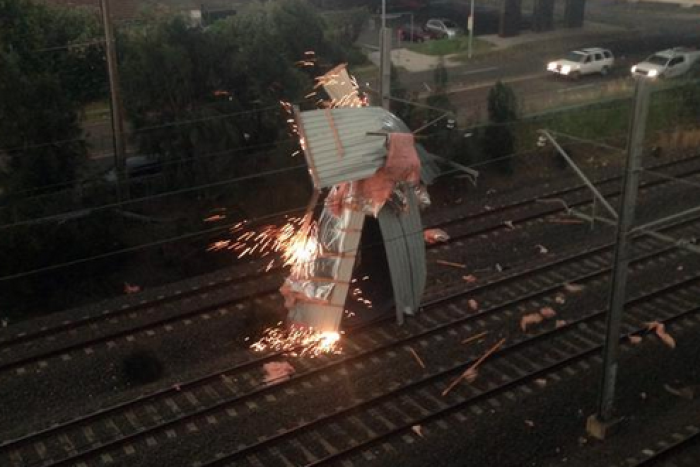 Thousands of Sydney homes were without power on Wednesday night after a severe storm lashed suburbs, brought down powerlines and trees, and lifted the roof of a house onto train tracks.

Crews worked to get power back to more than 18,000 homes and businesses, according to Ausgrid and Endeavour Energy, after the storm moved across parts of New South Wales on Wednesday evening.

Fire and Rescue NSW said it responded to more than 70 weather-related incidents.

“As a result of that, wires were down over the top of the car,” he said.

“Fire crews had to wait until the power was isolated by the power company before being able to rescue those people.”

A spokesman said the storm has caused minor flooding in Campbelltown, some electrical fires, and three residential fires which may been caused by lightning strikes.

A roof was blown off a house and landed on rail tracks at Mount Druitt station, forcing the partial closure of the Western Line and Blue Mountains rail line between Penrith and Blacktown.

The State Emergency Service (SES) said they had received almost 150 calls for help with storm-related damage in the Sydney Metro, Illawarra and Central West Districts.

The SES said the majority of calls related to fallen trees or “threatening” trees.

“Twenty-nine millimetres in 30 minutes was reported at Avon Fire Tower, that’s in the Illawarra,” he said.

“As it did get into the metro we did have some reports of 39 millimetres in 30 minutes at Guildford, that’s near Auburn.”

An A-League game between the Western Sydney Wanderers and Melbourne City was delayed and started later due to the weather.

A severe thunderstorm warning for the Metropolitan, Illawarra and Lower Western districts was later lifted.

A warning was put in place at 9pm (AEDT) for the Hunter and the Central Tablelands, Central West Slopes and Plains.

The BoM said large hailstones and heavy rainfall that may lead to flash flooding and damaging winds were likely.