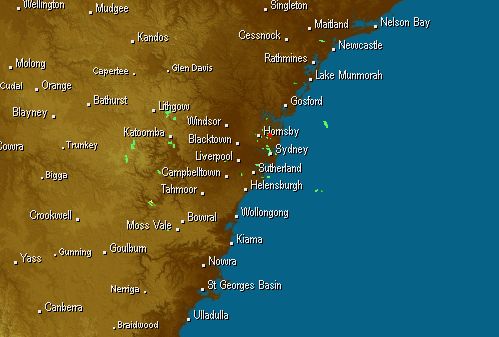 Sydneysiders have enjoyed a warm start to autumn however some cooler, soggy days are on the way.

The running average maximum for March this year is 26.9 degrees, 2.2 above the long-term figure. Every day since March 3rd has warmed above the average of 24.7 degrees. This trend will continue on Sunday as a warm airmass filters through the Sydney Basin ahead of a trough. The trough is expected to move through Sydney late on Sunday bringing a weak cool change.

On Monday the trough will stall and linger over much of eastern Australia. To the south, a large high will direct a deep moisture laden airmass over the east, adding significant moisture to the unstable atmosphere. These two features will combine to bring a cooler and soggy start to the working week for those in Sydney.

Sydney is forecast to reach a more seasonal 25 degrees on Monday and 24 on Tuesday. Although it is likely to remain at least a couple of degrees below this for much of the day, especially as heavier showers pass over.

Showers are likely to fall through much of Monday but will become heavier and more frequent later in the day and through the evening. Widespread falls of 20-40mm are likely and isolated falls of 100mm are possible. Showers will persist through Tuesday but will ease as the day progresses. Falls of 10-20mm are likely throughout the Basin with falls of 50mm possible, more likely about the southern suburbs.

The rest of the week won’t be as wet but showers will hang around the Basin until at least Friday.