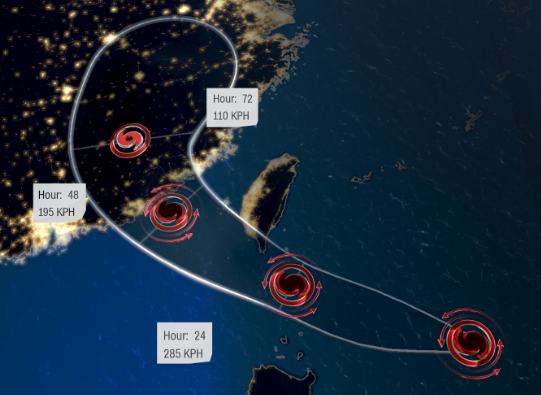 It only took 24 hours for Super Typhoon Meranti, which is threatening Taiwan and mainland China, to roar from the equivalent of a Category 1 storm to a top-scale Category 5.

Meranti is forecast to make landfall along the southern tip of the island of Taiwan, home to more than 23 million people, on Wednesday morning local time.
Fortunately, most of the population lives on the northern and western side of the island. Even though Meranti, which likely will still be a super typhoon at landfall (meaning the winds are in excess of 150 mph/240 kph) on the southern tip, the entire island will feel the storm’s wrath.

The tropical storm-force wind field from Meranti stretches more than 350 miles (560 km) from one end to the other; Taiwan is only about 230 miles long (370 kms).
Dangerous winds, however, are only one of the potentially devastating impacts Meranti will unleash on Taiwan and then mainland China. Torrential rainfall, which frequently accumulates to over 3 feet (1 metre) over the mountainous terrain of central Taiwan during typhoons, can produce deadly flash floods and devastating mudslides.

Taiwan, which is a frequent target for powerful Pacific typhoons, has a very good track record of limiting their deadly impacts. But as the storms move into the mainland, they often turn deadlier. A combination of flatter terrain that is prone to storm surge and inland flooding, higher population and more vulnerable living conditions often result in higher numbers of people killed and misplaced by the storm.
This was the case with a similar storm, Super Typhoon Nerpartak, which hit in almost the same location as Meranti is forecast to travel. Nepartak, which made landfall on July 8, caused at least three deaths in Taiwan and cut power to over half a million, but became much deadlier as it moved into mainland China.

Super Typhoon Nepartak approaches Taiwan before making landfall on July 8th, 2016.
Despite weakening to a tropical storm as it hit mainland China, Nepartak and the associated heavy rainfall of up to 10 inches (254 mm) killed more than 80 people. Meranti is expected to be much stronger than Nepartak when it hits mainland China, with winds around 115 mph (185 kph), which would make it equivalent to a major Category 3 hurricane in the Atlantic.
A combination of very warm western Pacific ocean waters and weak upper level winds have allowed Meranti (pronounced me-run-ti) to undergo what meteorologists call “rapid intensification.” It went from 85 mph (140 kph) on Sunday to a sustained 180 mph (285 kph) on Monday afternoon.
Rapid intensification presents great challenges to forecasters and disaster management officials, as it can quickly up the ante when it comes to expected impacts from tropical cyclones.
If the forecast holds, and Super Typhoon Meranti makes landfall with winds of 155 mph (250 kph), it would be the strongest typhoon to make landfall in Taiwan since Super Typhoon Bilis in 2000.
– By friend of WeatherWatch and CNN Senior Meteorologist Brandon Miller.