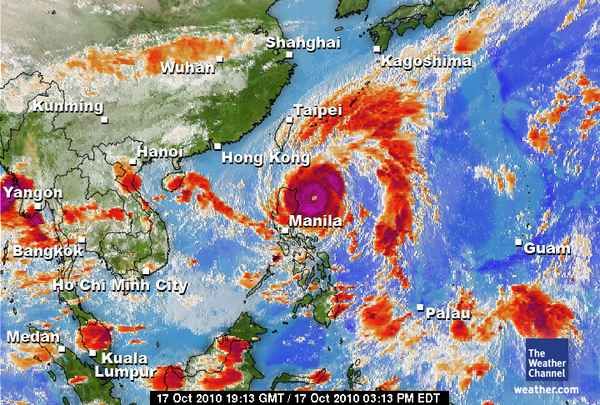 Megi has undergone rapid intensification late Saturday night, and is now classified as a “Super Typhoon” as it tracks toward the northern Philippines.

Full details on this amazing tropical storm – central air pressure 893hPa – below, including maps and images via weather.com

There have been only 3 Atlantic hurricanes on record with a lower central pressure than Megi:

Megi’s central pressure was lower than the following infamous hurricanes at their lowest pressure:

Typhoon Tip (1979) holds the record in any basin for the lowest recorded pressure, an incredible 870 mb, 12 mb lower than Wilma.

According to the latest forecast path, Megi will plow into the northern Philippine island of Luzon  Sunday night, U.S. time.  Currently, Megi is expected to pass north of the Philippine capital, Manila (population:  20 million).

Typhoon warnings were posted by the Philippine government along coastal and landslide-prone parts of Luzon.  Authorities were urged to suspend fishing and sea travel.  Residents of low-lying Cagayan and Isabella Provinces had voluntarily evacuated to higher ground.

Super Typhoon Megi forecast path
Image:  Joint Typhoon Warning Center
Megi would then track into the South China Sea and likely reintensify ahead of a second landfall in China or Vietnam later this week.

There have been only 14 named storms, including Megi, in the western Pacific Basin so far this season.  The least number in one season was 18 named storms in 1998.