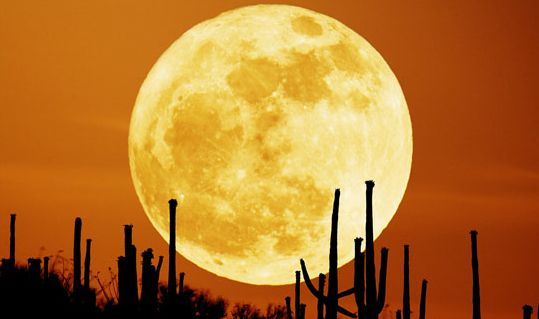 Last night was the night of the Super Harvest Moon.

It’s was the last day of summer in the Northern Hemisphere, the beginning of the autumn season and it perfectly coincides with a full moon. And it’s the first time in almost 20 years that the stars have aligned for an event like this. (We fully acknowledge that the moon is not a star but it’s not very often we get to use the phrase in such close context).

When the summer sun starts setting this evening, it will blend with the rising autumn moon to produce a unique “360-degree style” twilight. The two low-in-the-sky light sources mix together and illuminate the sky all around you, unlike than the typical one-at-a-time approach you see when you drive home from work. And it’s from this extra twilight lighting that the Harvest Moon gained its place in the celestial calendar. With farmers depending on moonlight to harvest their crops they would note the autumnal full moon. Thus the phenomenon’s name.

It’s not the first time that the moon has matched up to the calendar and created an event like this, but it’s the closest. In fact, the time between the official autumnal equinox (11:09 p.m. September 22, according to Science@NASA) and the full illumination of the Harvest Moon is down to only a handful of hours — just six. This is quite a drop considering that the full moon more commonly makes its full appearance days or weeks on either side of the equinox.

The closest its came to this in the past was September 23, 1991, but even then it was a 10-hour difference, and according to Science@NASA we won’t see it like this again until the year 2029.

Thanks.I didn’t know that.
What is the very bright star in the west at present? It is by far the brightest in the sky.

Venus,over the next couple of weeks it will draw towards the sun and by the end of october it wil show low in the east at sunrise.

Also in the autumn in both hemphispheres called a harvest moon as it rises for several days close to sunset due to the shallow angle of the apparent path in relation to the horizon.

Great interesting stuff, really enjoy these sort of items. Was not aware of the facts before.

Fantastic info. To a layman like myself and no doubt many others, these snippets of information are refreshing, interesting and can only enlighten our knowledge.
Thanks for this
Cheers