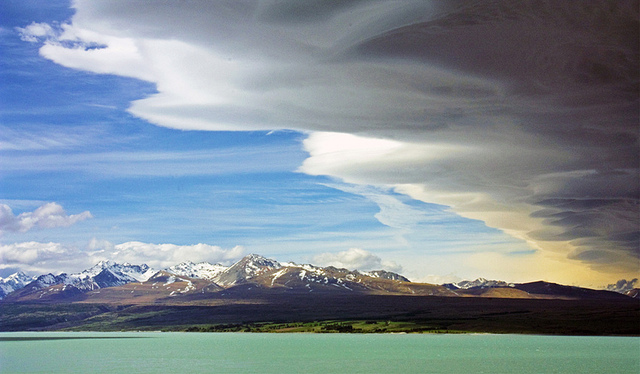 The South Island saw the most extreme weather today with rain and some heavy downpours over parts of the west, winds across inland and southern districts casuing problems for motorists and warm temperatures out east was more like late April than the beginning of winter.

The North Island certainly had more settled conditions overall however the wind picked up across the southern half and Wellington and Taranaki seemed to see the biggest gusts.

Auckland saw morning cloud lift unlike yesterday and conditions were pleasant this afternoon.

22 degrees was the national high in Kaikoura with Napier, Hastings and Ashburton on 21 and Christchurch 20.

Tonight sees rain slowly move north up the east coast of the South Island with a southerly pushing it northwards.
A deterioration in the skies over western areas of the North island is expected and also winds will be blustery in places.

Heavy rain caused problems around the Queenstown area today with minor flooding in the town.

Earlier today Dale posted ” Gusty northerlies here in Runanga/Greymouth.. wouldn’t classify it as anything special. Rainfall is next to zero but up in the headwaters there has been a substantial amount overnight as the Grey River.. well.. extremely turbulent to say the least”.

Leanne popped this up earlier…”Pleasantly warm in Dunedin, 16 degrees at the moment, sunshine creeping through some very dark clouds. Must be about to rain any second now. The combo of purple/grey clouds over the beach is impressive”.

North Canterbury had a reasonable Sunday according to Beth Richards “Gusty northerly winds and relatively warm here in Rangiora, clouds and sunshine”.

Tomorrow’s public holiday isn’t looking overly impressive for much of the country with wind, cloud and rain more predominant than anything else but the east of the North Island and the northern regions might escape the worst of it all.