Home > News > Sunday will be unsettled for most...

Sunday will be unsettled for most 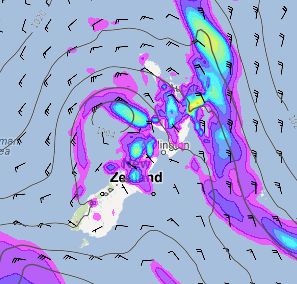 The low tracking slowly across the Tasman will still be to our west tomorrow.  That means another day of clouds, wind and rain.

The threat for heavy rainfall will still be around tomorrow, but the main focus will shift the eastern North Island where the eastern Bay of Plenty and northern Gisborne will be most likely to see heavy showers.

In fact, Government forecaster MetService has a warning in place for heavy rain for the Bay of Plenty east of Kawerau.  Rainfall rates could reach 20mm/hr tomorrow.  Whilst northern Gisborne is not under a warning at this time, it is possible would could be required tonight or tomorrow.

The western North Island could actually see a bit of break in the precipitation tomorrow morning and early tomorrow afternoon, even though Auckland, Hamilton and Whangarei may see a few quick showers pass through during the morning hours.

But during the afternoon tomorrow, another band of wind and rain is expected for the western North Island.  Winds will pick up again as well.  Some brief heavy falls are possible about Auckland and Taranaki, especially late the afternoon.

On the South Island, there is a small threat for heavy rain about Nelson during the evening hours.  Just some general shower activity is expected for the rest of the upper half of the Mainland during the morning and afternoon.

Southland and Otago will probably not see much in the way of precipitation tomorrow.  Maybe a few brief showers in the morning.  However, as Sunday wears on, those precipitation chances will diminish.