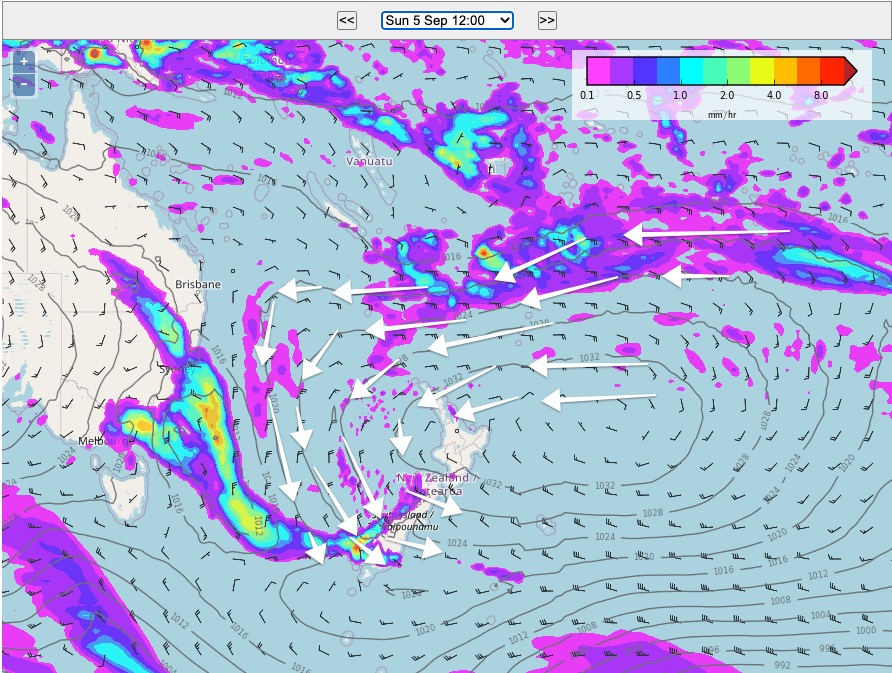 High pressure is moving off New Zealand to the east but as it does it’s dragging down a sub-tropical airflow into some southern and central regions over Sunday and Monday. Other areas in the north, like Auckland and Whangarei, have an easterly.

This airflow means temperatures both by day and night are above average for this time of year in a number of regions, although inland areas that don’t have wind yet (like sheltered parts of Central Plateau) may still have frosts overnight tonight.

In the days ahead developing low pressure and a cold front out of Australia are heading our way with rain from the west and a temperature drop coming nationwide. Showers and rain start to increase on the West Coast as of Sunday with heavy falls in the days ahead. 100 to 150mm of rain is possible. Lighter showers will also develop in northern NZ in the nor’east flow. The upper North Island has had a week of easterlies lately, windy in coastal areas most days. These winds will again increase in the coming day or two, then even windier sou’westers kick in by Wednesday.

North to north west winds increase further on Monday with gales increasing in central NZ (Cook Strait) and through Alpine areas where severe gales may be possible.

The main cold front moves into the lower South Island on Monday afternoon.

To drill down deeper use our detailed hyper-local IBM forecasts (the World’s Most Accurate Forecaster) at www.RuralWeather.co.nz and www.WeatherWatch.co.nz.