Summer may kick off wet & windy 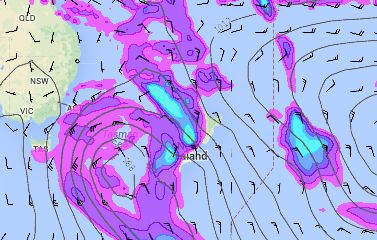 The official start to summer in New Zealand and Australia is now just 10 days away and the forecast at this early stage looks more like October’s weather than December, for New Zealand at least.

While long range forecasts, especially in spring, can change, the models have been fairly consistent for a few days now that a low is likely in the final day(s) of November followed by a larger Tasman Sea low for the start of December.

If the computer models are correct – a combination of US data and data from here in New Zealand via Weathermap – then we can expect a few wet and windy days between December 1 and 3 – followed by a cold southerly change.

It’s not unusual for December to see spring-like weather though.  In fact a number of New Zealanders don’t believe summer officially starts until the longest day of the year, the Summer Solstice, which is a few days before Christmas.

Either way, the hotter weather is already slowly moving in – but a brief cold change in early December may temporarily halt that.  We’ll keep you updated over the next week or so.

LOL weather is returning to normal. Normally choppy in the Wellington Region. True summer with settled weather doesn’t start here until Feb as a rule.

If this does happen how cold are we talking for Auckland? Cool enough for Winter wear?

Hi there – it’s too far out to know just how cold the possible southerly will be.  This is because the set up will unliklely be *exactly* as the models suggest – ie, a small change in the shape of a high or low can mean the difference between a freezing southerly or simply a cool sou’wester.  At this stage we think it could drop Auckland down into the late teens for a day or so…hardly cold!

Can’t wait for this.