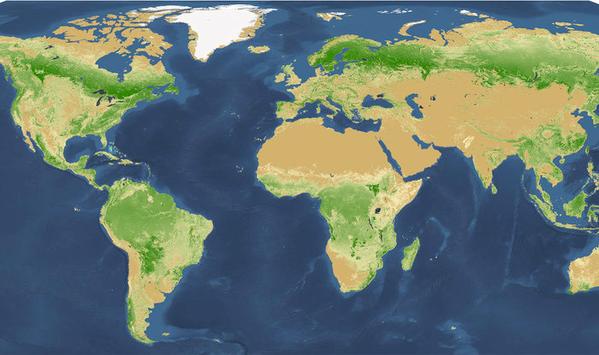 (CNN)The good news: A new study finds that there are 3.04 trillion trees on Earth, 7Â½ times more than previous estimates.

The bad news? Researchers estimate that the total number of trees has plummeted by roughly 46% since the dawn of human civilization. And we’re mostly to blame.

An international team of researchers employed satellite imagery, forest inventories and supercomputer technologies to map tree populations worldwide at the square-kilometer level. The resulting study, led by scholars at Yale University, was published this week in the journal Nature (PDF).

Researchers from 15 countries collaborated on the study. They say it’s the most comprehensive inventory of tree populations ever produced.

Seeing the forest and the trees, all 3 trillion of them http://t.co/RSoyfrizpb Via @Yale More: http://t.co/jYaMjC058t pic.twitter.com/g7mb9UcpXf

“Trees are among the most prominent and critical organisms on Earth, yet we are only recently beginning to comprehend their global extent and distribution,” said Thomas Crowther, a postdoctoral fellow at the Yale School of Forestry and Environmental Studies and lead author of the study.

“They store huge amounts of carbon, are essential for the cycling of nutrients, for water and air quality, and for countless human services,” Crowther said in a statement provided by Yale. “Yet you ask people to estimate, within an order of magnitude, how many trees there are and they don’t know where to begin. I don’t know what I would have guessed, but I was certainly surprised to find that we were talking about trillions.”

The study was inspired by a request two years ago by Plant for the Planet, a global youth initiative that plants trees to reduce the effects of climate change. At the time, the only global estimate was about 400 billion trees worldwide, according to Yale — or about 61 trees for every person on Earth.

Scientists made that prediction by using satellite imagery and estimates of forest area but did not incorporate any information from the ground. Crowther and his colleagues also collected tree-density information through national forest inventories and peer-reviewed studies that included tree counts verified at the ground level.

The highest densities of trees were found in boreal forests in the sub-arctic regions of Russia, Scandinavia and North America. But the largest forest areas are in the tropics, which are home to about 43% of the world’s trees.

Researchers hope their findings will inform scientists about the structure of forest ecosystems in different regions and help improve predictions about carbon storage and biodiversity around the world.

But the study also serves as a warning about how human effects — such as clearing forests to build subdivisions — decimate the world’s tree population.

Deforestation, land development and forest-management decisions are responsible for a gross loss of over 15 billion trees each year, reported the study, which noted that tree densities usually plummet as the human population increases.

“We’ve nearly halved the number of trees on the planet, and we’ve seen the impacts on climate and human health as a result,” Crowther said. “This study highlights how much more effort is needed if we are to restore healthy forests worldwide.”

There are about 6 billion a year cut down. Is that sustainable?

While I’m no Tree hugger it would be nice to see them NOT cut down realising their importance to the Eco-System.