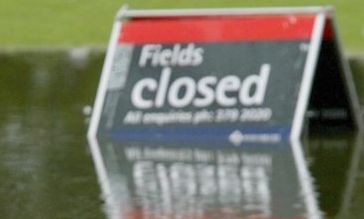 Auckland’s 20 per cent cancellation rate for winter sports games because of water-logged fields has led to a call for a $103 million boost to field improvements over the next decade.

Auckland Council closes fields when it thinks further play could cause long-term damage to the surface.

This season, the Herald reported dozens of complaints from parents about children missing five out of 16 scheduled games, mostly for soccer, which is the most popular.

It estimated $10.3 million a year over the next decade, and she would ask for that when the council prepared its long-term budget.

“We need to meet rapidly increasing demand and provide playing surfaces that stand up to high use and wet winters.”

The money would provide 20 new artificial fields – half of them in the central area, four in the south and three each in the north and west. However, there would still be a potential need for up to 300 sand-carpet field upgrades to help meet shortfalls for training.

The move for more capital improvements was welcomed yesterday by Howick parent Navzad Cooverji, who said the Fencibles 10th grade soccer team could not play a game from June 4 until July 30. Despite the lack of competitive games, he said, the team won the Clendon Football Tournament.

“Thank you, that would be welcome,” said Mr Cooverji.

The present regional budget for capital improvement is $25 million, and $30 million is spent on field maintenance.

The Longdill study found the region’s 777 winter fields for community use gave the capacity for 8544 playing hours a week and could meet demand – if it were not for wet-day closures.

It was predicted that the shortfall in capacity because of the closures would worsen from 1724 hours to 2216 hours in a dry season, and to 2984 hours allowing for closures.

A few years ago Councils in Auckland decided that they didn’t need so many sports fields. Cost of maintaining too high. No problems, amalgamate clubs and double or treble the use of some existing fields.  Increased wear and tear naturally occurs. Don’t blame the weather for all the damage.

Wonder if the present day costs are far greater than before this happened.