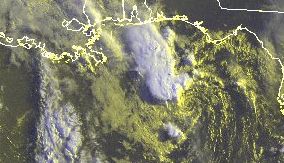 According to an 11 a.m. ET advisory, the warning — which had been in effect for Destin, Florida, to Morgan City, Louisiana, including the Lake Pontchartrain region — was discontinued.

Before the storm moved into the Gulf, operations to clean up the BP oil spill were put on hold until the system’s path and severity could be determined.

Bonnie made landfall as a tropical storm around noon Friday near Biscayne Bay in southeastern Florida, with maximum sustained winds of 40 mph. But it weakened as it crossed over the state.

The maximum sustained winds have decreased to around 55km/h hour with higher gusts, just under storm force strength.

“The winds are confined to a few rainbands mainly to the north of the center. No change in strength is forecast before the center reaches the coast. A gradual weakening is expected as the system moves inland,” the advisory said.

The advisory also said isolated gusts to tropical storm force winds in squalls may spread over parts of the northern Gulf coast.

BP suspended work on a relief well to permanently seal the damaged well ahead of the storm. And the federal official overseeing the effort, retired U.S. Coast Guard Adm. Thad Allen, ordered ships in the area to shore because of the choppy seas and gusty winds that Bonnie will bring. That could delay operations at the well site for 10 to 14 days. But Allen said there’s enough confidence in the well’s integrity that it will be left capped and closed during the rough weather.

Ships used to skim oil off the surface will have to come ashore as well. Hundreds have been operating off the coast.