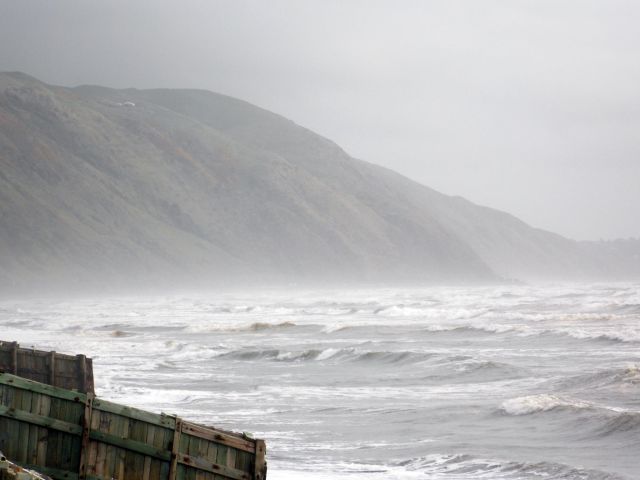 Over a week ago tens of thousands of people attended the end of Fieldays in Waikato with cloudy skies and patchy rain.  Most didn’t know it at the time, but this was the start of our week long low that would morph into a storm that would create one of the most brutal southerlies ever seen in New Zealand.

In total the low will spend about 9 days affecting our weather – the first half of it was calm and non-stormy but showed the first signs of something serious after heavy rain in Nelson lead to a landslide that killed one person.

By the time the southerly had injected itself into the low a few days later (mid-week) it was exploding into a storm that dwarfed most  – if not all – storms on earth at the time.

As we said earlier this week, the storm was very similar to the 2011 August one, however being in June – a full two months earlier – the air was therefore two months warmer.  Friday was the shortest day of the year and typically the coldest weather follows over the next two months.  If this storm had hit in August we have little doubt it would’ve eclipsed the 2011 storm.

For Saturday the eastern side of both islands is still in the firing line of a very cold southerly bringing more wintry showers and snow on the hills.

By Saturday night the storm will be pushing past the International Date Line and away from NZ.

The storm was rare – but as WeatherWatch.co.nz predicted in February it was also expected.  Our predictions during the peak of the droughts was that winter would see a “chaotic weather pattern” defined by sub-tropical lows bringing big downpours and warm weather, especially to northern facing regions, but also a fairly high risk of a repeat of the 2011 snow storm – as our weather pattern is similar to that year.

Could we have another winter storm?  Absolutely – remember winter has only just started and snow storm risks linger into mid-spring (October).

But this is a chaotic weather pattern – anything can happen…and judging by the extreme weather we’ve seen so far in 2013 the second half of the year could be just as messy.

Hit there. Do you believe the snow will still lower tonight as you are forecasting latter today in wellington? Or is it all up now?

Hi Michael- starting to warm up slowly now across some parts of NZ – Wellington’s chances look to be gnoe now, still the risk of a flurry high up, but it’s just a couple degrees too warm.  Just like last night in Christchurch, it was 2 degrees and raining – it doesn’t get closer than that to being a major snow event, just a degree or so colder and that city would’ve been white out today!

Just another typical “winter” in auckland,week after week of gales,rain cloud,showers,whether its anticyclone or low pressure,no doubt will last till november at least.