Storm likely to cause damage 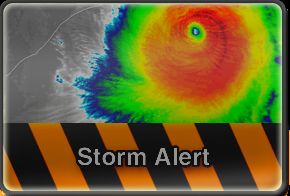 Gale force winds have arrived in New Zealand as a particularly aggressive and potentially destructive storm quickly develops north west of the country.

As of 10pm Friday winds averaging 65km/h and gusting over 105km/h were blasting Cape Reinga in the Far North.  Rain was falling across northern parts of Northland.

The storm will most likely bring severe gales and torrential rain to northern New Zealand this weekend and the potential for damage will be high for some regions too.

However further south in Auckland conditions remained calm and cool with cloud thickening overhead at 10pm.

WeatherWatch.co.nz head weather analyst Philip Duncan says the storm is looking increasingly concerning.  “Each computer model update is showing the storm deeper and moving closer to New Zealand than the model before it”.

“We are predicting wind gusts may reach 150km/h or even 160km/h in exposed places along the western Kaimai Ranges while torrential rain may cause flooding in Northland, Coromandel and East Cape”.

Mr Duncan says wind damage in winter isn’t usually as severe as in summer when trees are heavier with leaves however soggy grounds can lead to trees being uprooted and slips.  “There’s definitely a high chance for flooding, slips and tree damage in eastern parts of Northland, Coromandel and East Cape while wind damage only is expected in eastern Waikato and the eastern Haurakai Plains”.

WeatherWatch.co.nz advises those in areas where weather warnings have been issued to make sure roofing iron is secured and things that could break in the wind are tied down or put away.   The weather centre also reminds farmers and trampers to watch for rapidly rising rivers and streams, especially in the ranges where rainfall totals may top 200mm.

“We’re not wanting to alarm people, this is a moderate storm, but people should be prepared for powercuts and the potential for some damage”.

WeatherWatch.co.nz says there is a possibility the storm may head further east which would significantly reduce any severe weather over northern New Zealand however all the latest weather maps are indicating the low will have a near direct impact this weekend.

Check back across the weekend for extra updates.

Palmy weather is ok.. the temp is 9 deg although feels colder than that.. the wind is SE and the speed is about 20 km. Overcast – no rain in site traffice movements all looking good

Its blowing in Kerikeri with high gusts and squawly showers/rain from the East, if gets much stronger then will cause damage. But ok at this stage

The rain has started here now in Auckland but not a breath of wind as yet.

Had moderate to steady rainfall here overnight in this area – however – no heavy rainfall as yet,

Is Welly gonna be the windless city this weekend, what can we expect for Saturday Evening. cheers

Light winds with south easterlies picking up by Sunday morning.

Light spits out there at the moment here in DB area – had a lull in the wind earlier on this evening ( like the calm before a storm) – however, have noticed that the wind started to pick up just slightly again.

Is this storm likely to dump alot of snow on Mt Ruapehu?It is certainly needed

Not really…its coming from the wrong direction (sub-tropics).  Might be some heavy dumps at higher altitudes.  Could be some snow to low levels on Monday as the southerly kicks in.