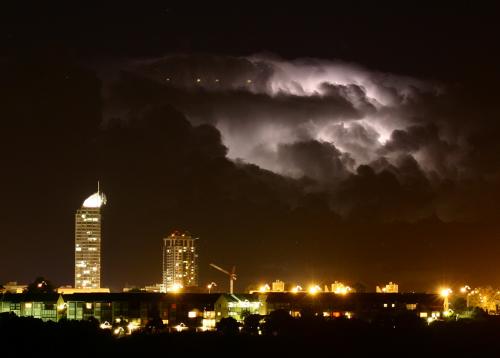 Severe weather overnight has brought down trees, slips and cut power to thousands.

See photos and a video of last nights storm here.

NewstalkZB reports a number of roads have been affected by the stormy weather.

State Highway 4 is closed at Raetihi. A slip has blocked the road from Wanganui River Road to Raetihi in both directions. Fallen trees are a problem on State Highway 56 at Makerua in Manawatu. The road is open but caution is needed.

As well, the portion of State Highway 57 between Palmerston North and Linton is marginal.

Power was cut to around 4000 customers in North Taranaki after severe weather caused damage to multiple sections of Powerco’s electricity network.

Mr Marsh says there were also a number of isolated properties across Taranaki that were without power due to storm damage to service lines.

WeatherWatch.co.nz says that conditions should ease over the next 24 hours with much lighter rain already falling in a number of northern regions.

No siginificant thunderstorms are forecast for today by the Weather Watch Centre however predictions of more stormy weather coming this weekend are now starting to come in.

A large area of low pressure looks likely to develop in the Tasman Sea and spread across the country, bringing more heavy rain to northern and western regions of New Zealand.

We were lucky it seems here in Whangarei as all the bad stuff missed us I am glad to say, we did not get overly much rain, little or no winds and no lightening or thunder either. A blessing I am sure.

But as you are mentioning another low building up I will again go through the stress of waiting to see what this one will do and if we can avoid it as much as this last one. I am not a fan of these big lows full of rain and wind, seen to much damage up this way in past years to be quite happy to not ever see another one.

My sympathy goes out to all those who have been affected this weekend. We seem to be going from one extreme to another, record cold temps and frosts to mighty big low depressions full of water and winds causing problems, Oh for just a normal type weather pattern for the winter.

Well our weather is actually pretty nice. A couple of small showers this morning, little or no wind and now the sun has come out. I think we were really lucky ( Or unlucky as I did fancy seeing a huge thunder storm) as it seemed to pass us by. Got 50ml of rain but it was almost all over night.
(Near Bay of Islands)

Errr Click “more” to see video of lightning striking sky tower and for the latest on power cuts and road closures – plus a sneak look at the next possible storm).