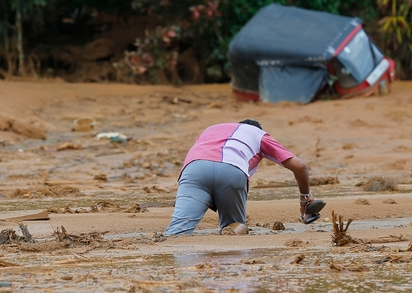 Heavy rains yesterday pounded the central Sri Lankan region where at least three villages have already been swallowed by mountains of mud, forcing soldiers and police to suspend rescue work.

At least 18 people are known to have been killed and hundreds are reported missing in the landslides so far.

Rescue work had resumed early morning before fresh rains began in the area, but was halted for about an hour as minor landslides made the work dangerous. Torrents of water streamed down the hill on which the three villages of Siripura, Elangapitiya and Pallebage were located at different elevations.

Asked whether rescuers expected to find survivors, army Major-General Sudantha Ranasinghe said, “I have my doubts,” and pointed to an area in Elangapitiya village where 66 houses once stood.

“We don’t have a trace of any house here. All gone with that landslide. So I have my doubts.”

Military spokesman Brigadier Jayanath Jayaweera told reporters in the capital, Colombo, that the army was assessing the situation and would deploy more troops if needed.

Heavy rains have lashed the island nation for several days and officials said the extent of the tragedy was still unclear. The Sri Lankan Red Cross said at least 220 families were unaccounted for.

“The task is to figure out what happened to them,” the Red Cross said in a statement, noting that some people may have left after local officials warned earlier this week of possible landslides.

Jayaweera said that the army had so far rescued 156 people trapped by landslides and more than 1550 people were in nine shelters.

Heavy fog, rain, electrical outages and the loose ground have made it difficult to search for survivors. Officials have also warned that, with rain still falling, more landslides could occur in the area.

The same rains that unleashed the mudslides also caused severe flooding in cities including Colombo, the capital, where tens of thousands of homes were at least partially inundated. Schools were closed due to the bad weather.