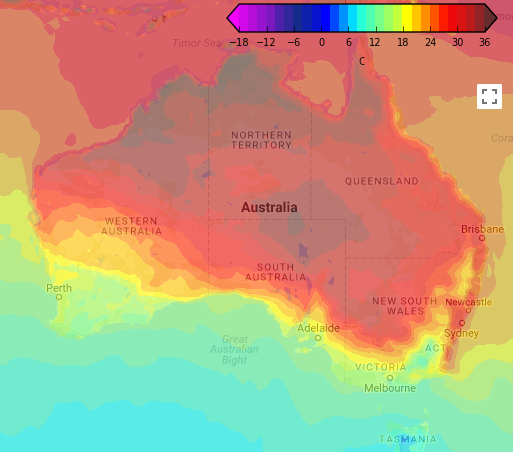 Most of Australia is cloud-free and it’s allowing temperatures to rise in the interior.  A large ridge of high pressure extending across eastern and central Australia is allowing the sun to shine across much of the country.

This abundant solar heating has pushed temperatures to their highest level in five months for some places on Monday.

Tarcoola’s 36 degrees on Monday afternoon was the South Australia town’s warmest day since April and the warmest September day in three years. Woomera’s 32 degrees was also a three year high for this time of year.

The warm air that was building over central Australia on Monday will sweep across the nation’s eastern states on Tuesday and Wednesday, ahead of an approaching trough.

Temperatures are set to climb up to 10 degrees above average in some areas of western NSW on Tuesday and parts of the state’s coast could see their first 30 degree day of the season on Wednesday.

A cooler change behind the trough will drop temperatures significantly during the second half of the week, with the spring see-saw remaining everyone that summer is still a few months away.