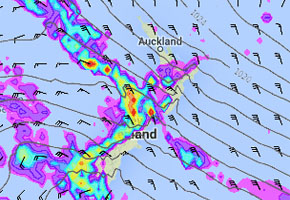 The main front associated with this spring storm makes its way into central New Zealand this afternoon, and then moves over the North Island overnight.

The main concerns today will be much like they were yesterday, very strong winds and heavy rain. Expect strong northwesterly gales for North Canterbury in the east through to the lower North Island. Hawke’s Bay and Gisborne may see winds gusting to gale force at times from afternoon also, while Wellington may receive severe gale winds for much of the day.

Torrential rain keeps north of Greymouth today, the front moves north of Buller in the evening with conditions easing there. About the North Island in the west, (south of the Central North Island) heavy falls move over after midnight.

Behind the front winds ease, but they will still remain fairly gusty through Canterbury and further north as the front moves on. Rain on the West Coast eases also but there may still be the odd heavy fall about, especially south of Greymouth where thunderstorms are possible too.

Late afternoon a front moves onto Southland and this may bring thunderstorms with hail, even some snow down to 400m overnight. The main effects of this front won’t be felt in the northern part of the island, with Otago its last port of call before it pushes offshore to the east. Canterbury may well see a wind change later in the night, however nothing much looks to come of it.