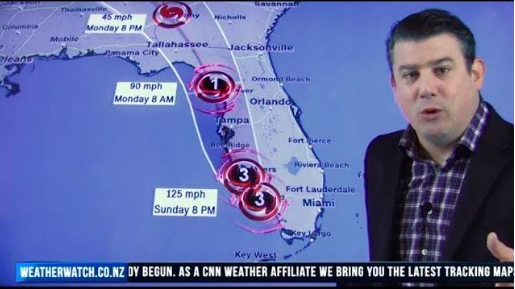 The week ahead is looking milder as winds shift westerly and then more norâ€™west later in the week. More rain and showers are coming though – and more winds.

The general theme for New Zealand this week is milder than last week but still wetter in the west and windier but drier in the east and far north.

The storm is tracking up the western coastline with a 3 metre storm surge and winds sustained at nearly 200km/h Major flooding has already begun. As a CNN Weather affiliate we bring you the latest tracking maps as of late Monday morning NZT (and remember visit our website or free app for updates across the day and week on Irma)

*Please note, as mid of mid-afternoon Hurricane Irma has gone further east than the models predicted. A small shift but makes a positive change to the risk of storm surges. As of 3:45pm Monday Hurricane Irma was in central Florida tracking towards Tampa and Orlano. This video was recorded on Monday morning NZT.