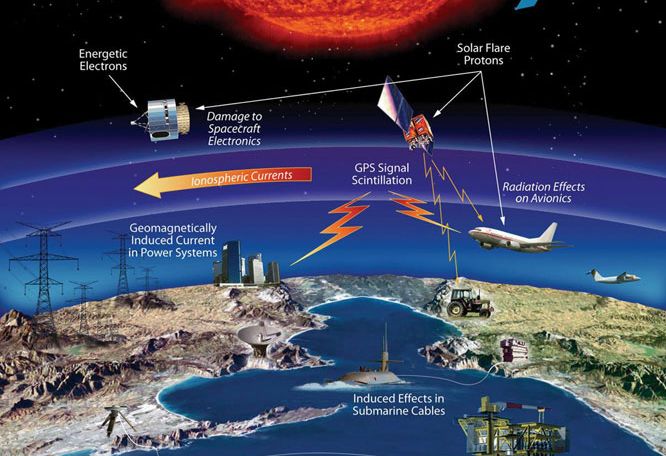 Five scientists speaking at a workshop meeting in San Francisco today will discuss the complex — and relatively new — research area of space weather.

The term refers to a host of disturbances that can alter the vast electromagnetic system stretching from the sun to Earth and all the way to the edges of the solar system. T

his system is increasingly dynamic as the sun moves toward solar maximum in 2013 and sends out correspondingly more energy and eruptions. Such energy can disrupt and even damage human technology, and scientists would like to predict space weather as well as meteorologists do for conventional weather on Earth. Our understanding of space weather has already improved substantially since the last solar maximum in 2001, and a host of spacecraft instruments are supplying data to continue to expand our knowledge.

The speakers will provide the context to understand the science of the sun-Earth system, discuss the details of potential space weather effects, and explain the state-of-the-art in terms of space weather modeling and prediction.

Earth’s own magnetic environment, the magnetosphere, is an inextricable part of this system, changing constantly in response to incoming energy from the sun such as the stream of particles known as the solar wind, giant eruptions of radiation from the sun called solar flares, or bursts of solar material called coronal mass ejections. In the workshop, Daniel Baker from the University of Colorado in Boulder, Colo., explains the current understanding of the physics behind this system. Showing high-resolution pictures of the sun’s roiling surface, Baker will trace ejections from their origin at the sun through space to Earth’s protective magnetic envelope. Here, under the correct circumstances, the sun’s energy can connect efficiently and effectively with Earth’s own atmosphere.

› View larger
So much of our modern technology is at risk from space weather, including satellites, communications and power grids. Airline passengers flying over the poles and astronauts can also be adversely effected. Studying the causes and effects of space weather can help us to better predict these events and to take precautions to minimize their impacts. Credit: NASA

Louis Lanzerotti from the New Jersey Institute of Technology in Newark, N.J., explains what happens next. At their most benign, such space weather events trigger beautiful aurora in the night sky as incoming particles collide with Earth’s atmosphere and produce light. But space weather can also adversely impact our modern technological infrastructure. Even in the mid-1800s, telegraph operators noticed that auroras in the night sky coincided with disruptions to telegraph operation – and today such disruptions can affect a much wider array of technologies that have developed over the last century. Such space weather-produced effects include loss of radio contact for airplanes on transpolar flights, astronauts imperiled by radiation, damage to electric grids, and disruption of cell phone service and underwater telecommunication cables, and destruction of satellite electronics. The effects of the sun can be complex, subtle, and some times quite surprising, and we need accurate models and accurate forecasts to protect modern technology.

Discussing the state-of-the-art in such models, Michael Hesse of NASA’s Goddard Space Flight Center in Greenbelt, Md., describes researchers’ recent successes in data analysis and modeling efforts. Hesse leads the Community Coordinated Modeling Center at Goddard, which combines models with real time observations from NASA spacecraft that together show all sides of the sun. By incorporating stereoscopic views of a coronal mass ejection, for example, scientists at the CCMC can better predict its direction and velocity.

Such prediction techniques are still young, not unlike the early days of Earth weather forecasting, but they nevertheless represent a giant leap in accuracy. Antti Pulkkinen, a scientist with both Goddard and Catholic University in Washington, D.C., describes the new more accurate, numerical-based models. These have been made possible due to improvement not only in the models themselves, but due to more comprehensive observations and the increased power of supercomputers. One use for such models: the Solar Shield Project, which can predict which areas on Earth may experience the worst effects from an incoming solar storm. Power grid operators can then take steps to protect their technology from harm rather than risk damage to their transformers.

Rodney Viereck of the National Oceanic and Atmospheric Association’s Space Weather Prediction Center (SWPC) in Boulder, Co., wraps up the workshop with a discussion on how the SWPC forecasters disseminate information to customers such as electric power grid operators, high frequency radio operators, commercial airlines, satellite operators, emergency managers, and a vast array of users who depend on satellite navigation (GPS). NOAA works hand in hand with government agencies such NASA, DoD, NSF, USGS as well as the research community, to incorporate the latest models and data into their Space Weather Prediction Center. Viereck discusses their role in the ongoing effort to put an operational satellite between Earth and the sun to provide real time warnings of incoming CMEs. The NASA Advanced Composition Explorer (ACE) currently fulfills that role and provides key data to drive space weather models. NOAA is working with NASA and DOD to replace the aging ACE satellite with a successor satellite called DSCOVR.

Interesting complexities of the sun and effects. mankind’s understanding of the universe is fascinating.