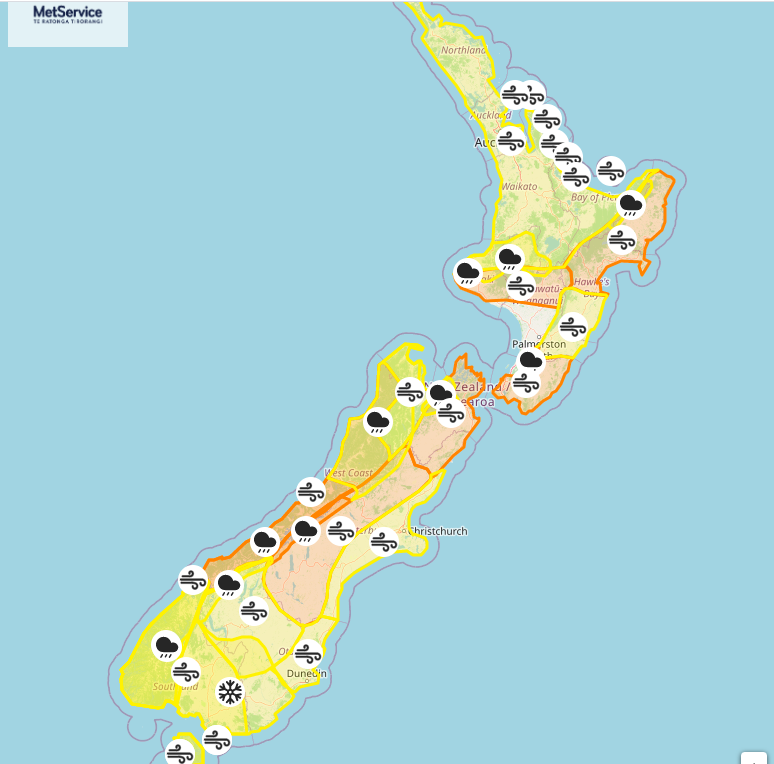 A rapidly forming storm is already underway over the south Tasman Sea and by early next week it will be centred over the Southern Ocean dredging up the most significant Antarctic blast in many years.

Southland and also Otago will be taking the brunt of the coldest polar air with the RuralWeather.co.nz wind chill forecaster for Invercargill and other parts of Southland showing it may feel like below zero for 50 hours. This period of cold weather would start Sunday night and not ease until Wednesday.

Daytime highs, not just wind chill, are miserable too – after a mild Saturday. Invercargill has a high of +4C degrees on Tuesday with snow and rain/sleet flurries.

Gore has snow on Tuesday and a high of just +2C, while Lumsden is expected to only reach +1C at the warmest point of the day with wind chill of -7C earlier in the day.

Monday and Tuesday will see snow flurries in Queenstown with highs of only around +2 or +3 degrees and overnight lows down to -4C.

Dunedin will get the temperature drop on Monday with the same colder wave coming in on Tuesday. Snow flurries are possible in the city overnight Monday and across Tuesday. Tuesday’s high in Dunedin is just +3C at this stage, with a wind chill (or feels like) temperature of -4C at the warmest point of the day.

At this stage, further north in Canterbury the air temperature will still be well down but the ranges of Southland and Otago coupled with the Southern Alps should see a large portion of the Canterbury plains protected from the worst of the Antarctic temperatures – but keep up to date with your local forecast in case this changes. Canterbury will be windy with severe gales likely at times.

NORTH ISLAND SNOW:
Snow is likely into the North Island too. Central Plateau, including Ohakune, National Park and Waiouru, may all get snow. The Desert Road is likely to be impacted by snow on Tuesday especially. Snow may even fall as low as Turangi near the mountains. The Napier Taupo high may get a dusting on the summit also.

SEVERE GALES:
Developing later today and increasing over Sunday, Monday and Tuesday gale force winds will affect various parts of NZ. Using your local WeatherWatch.co.nz or RuralWeather.co.nz forecast you’ll be able to check general wind speeds hourly for the next 10 days. Also check out our new warnings page to see any current Government forecaster wind warnings from MetService – a number of watches are already in place.

HOW WILL THE STORM IMPACT MY AREA?
RuralWeather.co.nz has the answers to most of your weather questions. We have HOURLY forecast for 10 DAYS for your specific part of NZ. It covers:
– Snow Icon if snow is forecast on a heavy level
– Rainfall totals
– Temperatures (Including hourly Wind chill)
– Wind speed and direction
– Barometric pressure
– Cloud cover
– UV
– And more
– www.RuralWeather.co.nz

WILL IT SNOW WHERE I AM? HOW COLD WILL IT GET?
www.RuralWeather.co.nz has forecasts for every single part of NZ, including city suburbs and our most remote spots. The data shows HOURLY wind chill at your location. The icons will also show a SNOW icon should snow be likely at your place. We’re also working on better snow information for future events (coming 2021) to help with gauging totals.

WARNINGS
Keep up to date with MetService warnings right here at WeatherWatch by going to our new warnings page here.