Southern temperatures down today, spring up early next week, then back down again 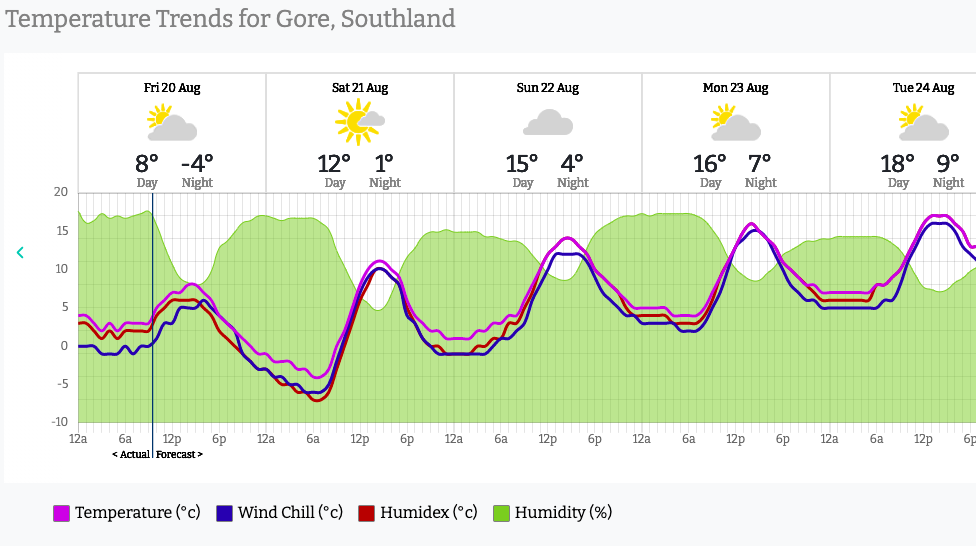 Today, Friday, isn’t overly warm in southern New Zealand as a wintry southerly moves through. Daytime highs will be in the single digits for some areas as peak cold moves through with this system.

But over the weekend nor’westers will develop – and by early next week they will have sub-tropical connections, which will significantly lift temperatures back up again for Southerners.

The mild weather will spread up NZ next week, pushing eastern and southern parts up into the late teens and yes, the early 20s possible for places like Canterbury. Not your typical ‘depths of winter’ forecast!

As WeatherWatch.co.nz said in our ClimateWatch video out last month, August was likely to kick off with cold southerlies for the first half, but more settled and milder for the second half nationwide. That appears to be panning out although high pressure may be slightly off land and out at sea – which actually encourages these milder winds for southern NZ. This placement also encourages heavy rain on the West Coast.

In the North Island it’s the other way around with a mild Friday in the east but a colder Saturday coming. The North Island’s isn’t so exposed to the colder air today – nor is it as exposed to the sub-tropical warmth earlier next week due to high pressure being parked over the area (or very nearby) creating for calmer conditions.

Check your hyper-local temperatures in our HOURLY and DAILY forecasts at WeatherWatch.co.nz and RuralWeather.co.nz – the most accurate forecasts in the world, powered by IBM.