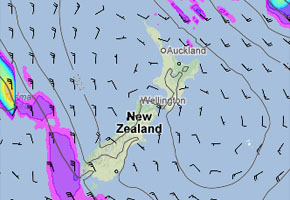 Now to turn our attention to the mainland after yesterday’s outlook for the North Island. Conditions are looking very settled tomorrow with light winds and afternoon sea breezes in coastal areas, some cloud is possible morning and night. From afternoon some cloud will move into Fiordland as a northerly airflow develops.

Friday is quite settled also and will be nice and warm particularly out east as a northwesterly airflow develops with a low forming in the Tasman Sea, expect some high cloud however. There will be some cloud spreading north along the West Coast during the day, drizzle patches develop about Fiordland in the morning turn to rain at night.

Saturday sees wet weather out west with northerlies, high cloud in the east with northwesterly winds as the low mentioned above deepens and moves a little to the south. Southland will be cloudy with the odd brief shower at times, mainly just on the coast itself.

Sunday is a little hard to ascertain, a broad area of low pressure spreads over the South Island so plenty of cloud is likely with areas of sun during the afternoon. Also watch for random isolated showers too especially in inland areas.

The pattern for early next week is looking a bit hard to nail down due to quite varying scenarios with different weather models, keep an eye on WeatherWatch.co.nz for future stories and forecasts on how things will shape up in the days ahead.